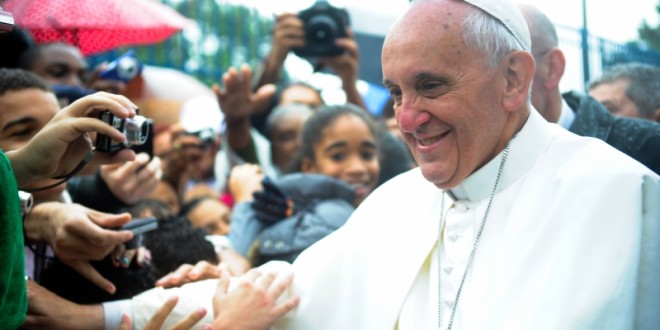 Palestinian activists on Tuesday were critical of Pope Francis’ plans to visit the tomb of Zionist founder Theodor Herzl.

Omar Barghouti, a member of the Boycott, Divestment and Sanctions movement called the planned visit “nauseating”.
“Laying a wreath on the grave of the founder of Zionism, a patently racist ideology that has served to enable and justify the ethnic cleansing of most of the indigenous people of Palestine, is a nauseating, offensive act of complicity that Palestinian civil society cannot but condemn”, he said, adding that the gesture would “serve to whitewash Israel’s occupation and apartheid”.

Mustafa Barghouti, a member of the central council of the Palestine Liberation Organizationquestioned the Pope’s choice, saying that if the Pope will visit Herzl’s tomb, the he should also visit the Yasser Arafat mausoleum in Ramallah to maintain “balance”.

However, most of the political elite in Palestine have offered the Pope a more welcoming tone, expecting him to strengthen ties with Palestinians and speak of human rights and justice.According to Abdullah Abdullah, the Fatah Movement’s Deputy Commissioner on International Relations, “The visit to Herzl’s tomb is not a problem – it’s a courtesy visit”.

Pope Francis will have to navigate a diplomatic minefield during his two-day trip of the Holy Land. He has already been criticized by both the Israelis and the Palestinians for his travel choices.

Israelis are not completely satisfied with the Pope’s itinerary. They are disappointed that he will fly from Jordan directly to Bethlehem in Palestinian Authority territory on Sunday, considering it recognition of Palestine statehood.Oded Ben-Hur, senior diplomatic adviser to the Israeli Parliament, said, “For the Vatican, they are coming to Palestine. We’re not very happy about it, but it’s a fact. We wanted to play it down”.

Palestinians are upset that the Pope will not travel directly to occupied East Jerusalem from Bethlehem. Instead he will go there after flying to the Ben Gurion Airport near Tel Aviv, which they say helps transmit the message that East Jerusalem is a part of Israel. According to Hind Khoury, former Palestinian Authority minister for Jerusalem Affairs, “The highest moral authority in the world is coming to Jerusalem through an Israeli airport, giving the impression he is recognising the sovereignty of Israel in East Jerusalem. We compromised by accepting such a small state and now we can’t get the recognition of the Pope that East Jerusalem is the capital of our state.”