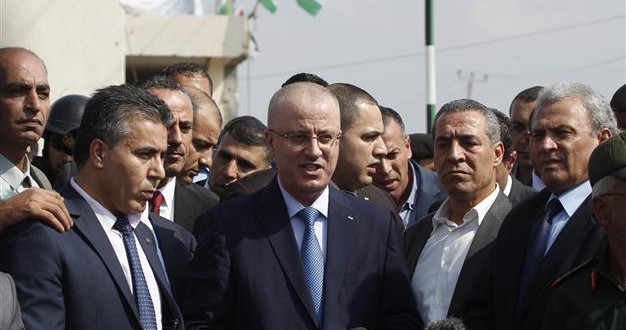 The Palestinian unity government on Thursday held its first meeting in the Gaza Strip as its rival factions presented a common goal ahead of an important donors’ conference. The meeting happened four months after the government was sworn in ensuing a landmark deal between Hamas and Fatah.The composition of the new unity government was decided by Fatah and Hamas in June this year.

Palestinian Prime Minister Rami Hamdallah entered the battered enclave on Thursday and visited some of the worst-hit areas during the 50-day war, which ended on August 26th, killing nearly 2,200 Palestinians and rendering over 100,000 people homeless. He also met with his ministers at a Gaza property owned by Palestinian President Mahmud Abbas.

“What we have seen today is dreadful and painful, and it has become clear to us that the rebuilding (of Gaza) is at the top of our list of priorities”, Hamdallah said.

Earlier in the day, he told reporters that rebuilding the enclave will require a functioning unity government.

“We are facing a humanitarian and moral duty to our people in Gaza.We have put the years of division behind us, and the most important priority of the government is to guarantee a return to normal life for Gazans and unity with the West Bank”, Hamdallah said while travelling through the Erez crossing.

After the cabinet meeting, former Prime Minister Ismail Haniya, a key figurehead of Hamas, spoke to the press, and urged Hamas and Fatah to come through on their reconciliation pledges.

“This meeting strengthens Palestinian unity and the end of a division we have lived for years and which has harmed the nation and (our) politics.We emphasize the need for the success of reconciliation, in all its forms, and the need to work together for this government to succeed in its mission”, Haniya said.