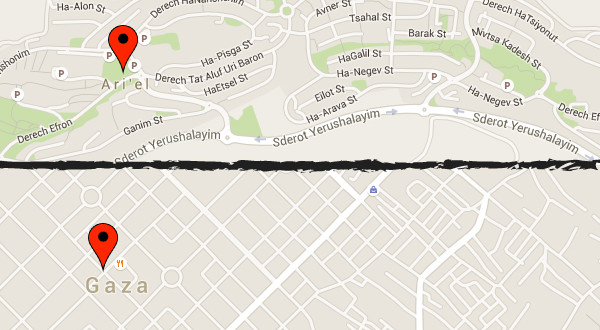 There’s no reason to think there’s anything wrong. Almost no reason. Except for one thing. There’s a military occupation going on. Forty-eight years later, unfortunately, this still has to be explained. And I don’t want to try to explain it to you by exploring international law or geopolitics. Wikipedia has that pretty well covered. Instead, let’s just talk about some of the things that go on in Ramallah and the rest of the West Bank and Gaza that simply don’t happen anywhere else in the world.   In fact, let’s just call it the WBG (West Bank and Gaza). See, we even abbreviate our occupation. That’s weird enough, right?

To be Palestinian is to live ludicrously. What might seem preposterous to anyone else is typical to us. The ordinary is bizarre, and the bizarre is ordinary. Being Palestinian means being an actor in the theatre of the absurd.

First, the WBG, even the apparently free-for-all atmosphere of Ramallah, is just one big prison. Sure, it has liberal visiting hours, good food, and minimal security. (Of course, the condition of minimal security only applies as long as you don’t protest your captivity.) They say you can put lipstick on pig, but it’s still a pig. Well, you can put $30 steaks in a prison, but it’s still a prison. Why is the WBG still a prison? Because it possesses the one main distinguishing feature of one: The prisoners can’t leave.

If you have ever entered the West Bank, you will remember that the Israelis (the prison guards) don’t bother you too much when you enter the gates. Leaving, however, is a totally different story. Unless you have some sort of almost-impossible-to-get restricted special permission, entry into the non-prisoner population of Israel is forbidden. This means that when I come from outside the West Bank to visit a friend inside the West Bank, after he has shown me great hospitality and grace, I cannot offer him the simplest of remarks: “Next time at my house.”

If you’re not convinced yet, the WBG has an added layer of abnormality. There are a bunch of non-prisoners roaming throughout the prison, living on the prison grounds, using a disproportionate amount of prison resources, and assaulting the prisoners with impunity. These people are called “settlers.” To add to the inexplicability of the whole thing, when the Israeli government offers any mild criticism or curtailing of the settlers’ activities (which are all illegal under international law, by the way), the settlers engage in “price tag” attacks. But while these attacks are meant to be in “protest” of government intervention, they are directed not against the powers that be, but against the prisoners, the indigenous Palestinians. That is some real alternate-universe type stuff.

Finally, we have the ultimate level of madness. Many who watch our saga in the news think that there is a country named Israel, a country named Palestine, and they’re fighting each other. But this is not the case. The Palestinians who live in the WBG are legally stateless. They are citizens of nowhere. They do not vote for the parties who ultimately rule them. The Israeli prime minister and parliament control the everyday fate of about 12 million people throughout Israel and the WBG. Only about 7 million of them actually have the ability to vote for him. Bizarre, right?

Being stateless comes with one last point of ridiculousness. Palestinians who live in the WBG live, well, nowhere. If you don’t believe me, you can just ask Google. If you look for Palestinian cities on Google Maps, you will find them. But there will be some things you won’t find, like street names. The Gaza Strip contains over 1.8 million residents (who are citizens of nowhere). I think I found two street names on Google. You would think 1.8 million people would buy you a few street names. Even Nairobi has street names! (Sorry, Kenya, but hey, you got an American president.) What this means for residents of the WBG is that they cannot surf on Amazon, order something, and have it sent to them, because the internet has no idea where they live. They don’t have addresses! Even Kenyans can order from Amazon! (Sorry again.) Even the smallest of the (illegal) Israeli settlements in the West Bank have street names. They have points of interest too. The 4 million residents of the WBG are given no such thing. It’s almost as if nothing is going on here at all. As a firsthand witness, I can assure you the opposite is true.

I hope I’ve been clear. Describing the phenomena of an alternate universe is extremely difficult. It’s like trying to explain what happens in a dream. Unfortunately, what’s going on in Palestine is not imaginary at all. If only it were.

I am in Ramallah. Restaurants with creative menus and talented chefs abound. You can run into tiny spots with out-of-this-world food, places worthy of a role on Food Network’s “Diners, Drive-Ins, and Dives.” There’s a Domino’s, a KFC, and a Starbucks (well, it’s called “Stars and Bucks,” but that’s a minor detail). There’s even a five-star Swiss hotel, the world-famous Movenpick. The nightlife is lively, with bars and lounges seemingly on every corner. In fact, without looking too hard, you’ll even find art galleries, hip cafes, and discos.

Amer Zahr is a Palestinian American comedian, writer, and speaker living in Michigan. He is also the editor of “The Civil Arab.”
israel people WBG West Bank 2015-08-18
sherehan
السابق Canada : B.C. university to offer course on the Business of cannabis
التالي ICRC ‘Worried’ at Abandoned Corpses in Yemen War