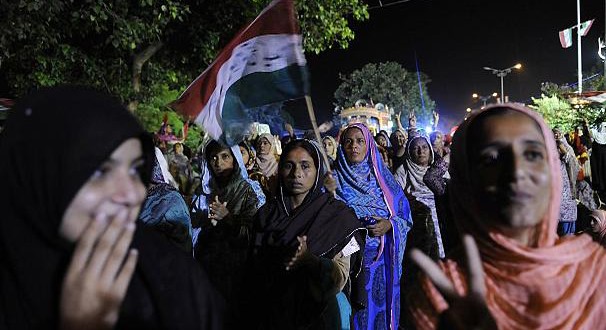 Pakistan: Protesters brush away blockades as they march towards parliament

On Tuesday, several thousands marched to the Pakistani parliament as a part of their bid to force Pakistani Prime Minister Nawaz Sharif to resign, using bolt cutters and a crane to break barricades of containers blocking the way in the capital city of Islamabad.

Paramilitary forces and riot police tried to barricade the government and diplomatic zone before the march began – they were told by authorities not to intervene as protesters moved obstacles in their path.

Hours before protesters set off, The Pakistani Interior Ministry had announced that soldiers will be deployed to block the protesters. Analysts suggest that the move was intended to send a message to the protesters, who do not have any armed backing. It also underscores how the opposition has forced the new civilian government to rely on its army despite the mistrust between the two.

The protests have also mounted extra pressure on the government as it tries to overcome the Taliban insurgency, daily power cuts and the high unemployment. The protests also raised questions over stability of the nation.

Both Qadri and Khan want Sharif to resign – Khan has accused the Pakistani premier of committing election fraud during last year’s election, while Qadri has accused him of corruption. According to the Pakistani police, the two leaders have around 55,000 supporters between them, but that not all of them were marching towards the parliament.

Both Qadri and Khan have been holding rallies in the capital with the government’s permission since Friday. However, they had been banned from the “Red Zone”, which houses the Parliament, the home and office of Sharif and many Western embassies. Their protests have remained separate so far since the two have different plans for what needs to happen after Sharif steps down.