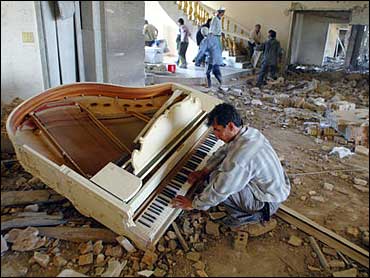 No one intervened when Iraq burned

Following on from the tragic and brutal murder of the Jordanian fighter pilot Mu’ath Al-Kaseasbeh at the hands of his ISIS captors, many people have been thinking about other savage acts of immolation and burning that they have seen.

Anyone monitoring Iraq over the past 13 years and paying attention to events beyond what the mainstream media deems fit to show us will be acutely aware of such barbarism existing for a very long time. However, this article is not a piece showing how ISIS and Al-Qaeda-type groups have been at this for a long time, but to shed light on the “others” – the perpetrators the world decides to ignore.

There are certain images and news stories that are now seared into my mind and the minds of every peaceful Iraqi. Mental health journals and some newspapers have already alluded to how a generation of Iraq’s children has been traumatised by the violence and savagery that they have witnessed. Undoubtedly, that trauma is not limited to Iraq’s children, but all those mothers, fathers, sisters, brothers and close friends who have witnessed the sudden, senseless and vicious murder of their loved ones.

The use of fire or chemicals to burn victims is nothing new in Iraq. My own uncle was tortured and murdered by being burnt with chemicals by Iranian-sponsored Shia death squads (now given uniforms and called the Iraqi security services) in order to extract a hefty ransom for his life. Burning was the least that these death squads inflicted, and here I must be quite explicit in what I describe, something some readers will find uncomfortable. The death squads and militias were infamous for pulling out eyes and fingernails, using power drills to bore through muscle and bone, administering electric shocks and smashing skulls with cement blocks. Countless Iraqis will know precisely and intimately what I am referring to.

These crimes have yet to cease and why should they? The international community seems to be selective when they listen to groups such as Human Rights Watch and Amnesty International, who have documented these crimes against humanity for a long time. Sectarian Shia militias routinely make examples of Sunni civilians through vicious acts like the Diyala massacre in late January, publicly displaying the bodies of Sunni civilians by hanging them from lamp posts in Baquba, and even slaughtering Sunnis en masse in their mosques. There is simply no will in the media or in political circles to humanise the situation of the Sunni Iraqis, because it would mean admitting that the experiment of the exportation of democracy failed miserably. It would also warrant a further look into the crimes of those who brought Iraq its Frankenstein monster of a state and governance system – the United States of America and its allies.

An Italian documentary released in 2005 showed the extent that the US was willing to burn its enemies. Much like Israel later burned Gaza with chemicals in “Operation Cast Lead” at the end of 2008; the Americans used white phosphorus on the densely populated Iraqi city of Fallujah in the Anbar province. Scenes from the aftermath of the US operation in November 2004 clearly show the charred remains of human beings, no weapons in sight, who were hiding in fear in their homes before being mercilessly burned to death with chemical munitions. These were unarmed civilians, including women and children, the UN explicitly banned the use of such chemical and incendiary munitions in areas populated by civilians even if an enemy force is fighting in close proximity to them.

The United States definitely committed war crimes in Iraq. Not only did they burn civilians to a crisp in Fallujah, but they also ensured a legacy of birth defects, cancer and premature death in Iraqi new-borns and infants. Again in Fallujah, but also in other Iraqi cities bombarded by the US and its allies, studies indicated that the increased incidences of Congenital Birth Defects and cancers resulting following the use of radioactive munitions exceeded that of the atomic bombings of Hiroshima and Nagasaki in 1945. The scientist responsible for the report goes on to say that the level of genetic damage and mutation found in Iraqis could be down to a “new weapon” deployed by the West. Many Iraqis are incredulous as to how effects worse than two nuclear bombs being dropped on Japan can be so readily ignored by the world at large, whilst the horrifying murder of one pilot can draw so much ire against ISIS. The United States has committed crimes similar to ISIS, only more egregious considering the scale of destruction and the long-term effects of the weapons they used on a population – that the recent American Sniper film made abundantly clear – that they perceived to be little more than “savages”.

This brings me to another incident of burning, savage murder and rape by US forces, this time in Yusufiya in March 2006. Paul Cortez, James Barker, Jesse Spielman, Brian Howard and Steven Green, all of the US Army, deserve to have their names etched into the collective consciousness of humanity, forever damned in the eyes of mankind. These men, no less vile than ISIS, desecrated the sanctity of the home of a defenceless Iraqi family, and by doing so they desecrated the honour of every Iraqi. They gang-raped 14-year-old Abeer Qassim Al-Janabi as they murdered her parents and younger sister in another room, and then the soldier who had just murdered her family proceeded to rape her again, her family’s blood still fresh on his hands, before shooting her in the head. They then set her body alight, and torched their house. Remember her name and that of her family. Remember that Iraq needs justice, and that the rapists of Iraq are still at large, and still dictating morality to us to this day.

Every single day we hear about the brutality and savagery of ISIS. When will we hear about the brutality and savagery of the United States, the Iraqi government they back, the Iranian-backed Shia militias and terrorist organisations, and Yazidi militias who violate Sunni women? More importantly, where was the international intervention brigade who is so active in Iraq now, but did not raise its head out of the sand when the US was creating the environment we see today for all the aforementioned savages to thrive?

Our continued selectivity in denouncing and acting against grave crimes allows them to continue, and as long as that happens and justice is not served, expect extremism to stay.