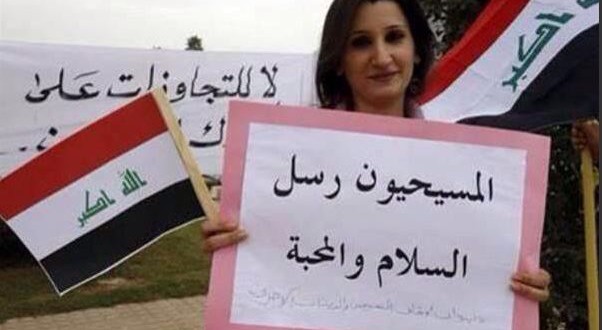 Thousands of people on Twitter, both Muslims and Christians, have expressed solidarity for Christians being persecuted in Iraq using #WeAreN.

Last week, members of extremist group Islamic State (IS) drove Christians out of the Iraqi city of Mosul – Christians have been living in the city for over 2,000 years. They were given the option of fleeing the city, paying a tax for being Christian or converting to Islam; those who had refused risked death “by the sword”.

The letter N has been drawn in front of homes in captured Iraqi cities to allow them to quickly identify the inhabitants. “N”,ن in Arabic, has been used by the IS to identify the home of a Nazarene, a Christian, in Iraq.

“For the first time in the history of Iraq, Mosul is now empty of Christians”, Patriarch Louis Sako said after the events last Friday.

“The heinous crime of the Islamic State was carried out not just against Christians, but against humanity”, he said in Baghdad on Sunday at a sermon attended by thousands, including over 200 local Muslims, most of whom wore t-shirts with “We are N”, “I am Iraqi, I am Christian” and “ن” printed on them.

“This has never happened in Christian or Islamic history”, Sako said.

People across the globe have now joined in the indictment of IS. The Church of England on Tuesday changed its Twitter display picture to a “We are N” symbol.

The Times on Tuesday published a letter byDr Geoffrey Rowell, a former bishop, in which he criticized the “savage attacks” on “ancient Christian communities” in the Middle East and labeled them “deeply troubling” and “chilling”.

Referring to an IS invasion of a 4th century monastery in Syria on Sunday, Roswell wrote, “The desecration of churches and tombs, the seizure of the ancient monastery and pilgrimage place of Mar Behnam, the human tragedies of refugee families dispossessed of their homes, are an unfolding tragedy in the latest martyrdom suffered by Christians”.

From today's mass in St. George Chaldean Catholic Church, #Baghdad, 'we are all Christians'. pic.twitter.com/0IatoyG2bB

Whoever sees evil let him change it w his hand, if he is not able then w his tongue, if not then w his heart #WeAreN pic.twitter.com/hImqqap4Ny