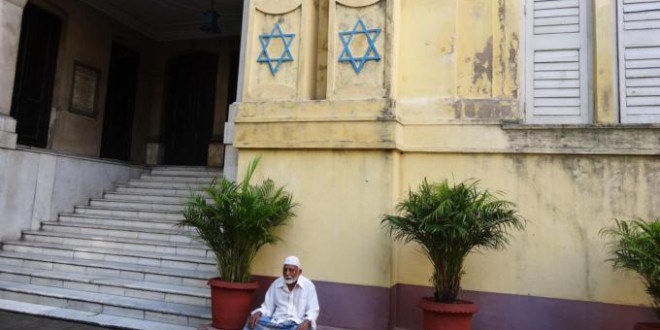 Sharif Higazy; A Global Citizen, For his socially-conscious entrepreneurship

At a time when tensions between Israel and Palestine seem to be at an all-time high, the small Jewish community in an eastern Indian city seems to be living alongside their Muslim brethren without any trouble.

Three synagogues in the Indian city of Kolkata, which boasts of a miniscule Jewish population of around 20, have had Muslim caretakers for generations, with no plans for the caretakers to be replaced any time soon.

Rabbul Khan looks after the Maghen David synagogue, just like his father and two uncles did before him.
“It takes a week to clean the entire structure, its furniture and artifacts. By Friday afternoon, the work has to be complete. This is necessary for the namaaz [prayers] that they perform on Saturdays”, he said.

71-year-old Khalil Khan has been looking after the Beth El synagogue for over 55 years; his sons Siraj and Anwar have also taken up the “family” job. Naseer Sheikh got the job 56 years ago after his uncle had left for his native village. 80-year-old Naseer’s son Osim also works with him.

Jael Silliman, a member of Kolkata’s Jewish community who put together a digital archive of the local Jewish populace, the Maghen David synagogue is one of Asia’s largest synagogues. He also said that all three synagogues in the city, Maghen David, Neveh Shalome and Beth El, are taken care of four people whose forefathers also had the same job.

The Muslim caretakers have no illusions about their Jewish employers, but say that they feel mutual reverence between the two communities; the recent bombing of Gaza has not affected their religois sentiment or their affiliation to the synagogues.

“The wars are taking place in other countries. If the Jews had any issues with our religion, they wouldn’t have hired us. Religion has its own place, while we have ours. This is something that we never think of. The Jews respect us and we respect them”, Rabbul said.

“The Quran, the Torah and the Bible have similar origins. How then could we be fighting?” Naseer said.
Noor Singh, the synagogue’s lone Hindu caretaker, said, “My father raised me by working here, and today I have the same job. It is God’s home, and it is my livelihood. I would give my life for this place”.

Professor Amlan Dasgupta from Jadavpur University says that the realities of daily life in Kolkata are very different from the political version of events being played out.

The generally immigrant-friendly city “is a product of the resulting multiethnicity and multiculturalism”.
“Communal coexistence has been common across India and hence we don’t think of it as important. Yet, there is also a problem in becoming conscious about it”, Dasgupta said.

Silliman also weighed in on the harmonious relationship between the two communities in the city.

“In Kolkata, Jewish families hired Muslim cooks because they ate only halal meat. Hindu families would not want to work in Jewish homes because of the meat being cooked. Our music, food habits are also very similar and people tend to forget that the Arab world is the seat of the Jewish community. Even the early immigrants looked like present-day Arabs, before they began to reflect a Judeo-British identity”, he said.