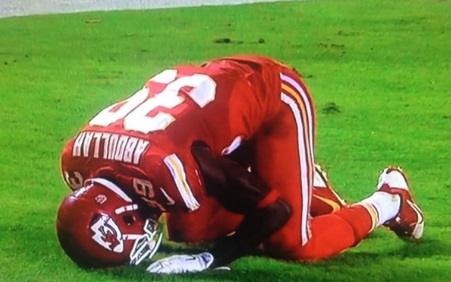 American Muslim NFL player Husain Abdullah was penalized by the National Football League (NFL) after he celebrated a touchdown by dropping down to his knees and praying. Abdullah scored for the Kansas City Chiefs as they beat the New England Patriots 41-14.

NFL officials presiding over the game penalized Abdullah for breaking “excessive celebration” rules by sliding on the ground on his knees and pressing his head to the ground after the touchdown. IT is not clear if he was penalized for praying or for sliding, by an NFL director later said that the decision made by the officials was wrong.

According to NFL rules, “players are prohibited from engaging in any celebrations or demonstrations while on the ground”; however, an exception exists which allows for players going to ground for prayer.

After the match, NFL’s vice president of communications Michael Signora tweeted, “Abdullah should not have been penalized. Officiating mechanic is not to flag player who goes to ground for religious reasons”.

Several fans took to social media to say that there were several instances of Christian football players celebrating their touchdowns with religious tributes or signs of deference.

29-year-old Abdullah later spoke to the Kansas City Star, saying that officials didn’t say anything when he was penalized, but later his coach conveyed to him that the penalty was for the slide.

Advocacy group Council on American-Islamic Relations (CAIR) urged the NFL to explain the reason for the penalty.
“To prevent the appearance of a double standard, we urge league officials to clarify the policy on prayer and recognize that the official made a mistake in this case”, Ibrahim Hooper, a spokesman for the group said.