Locked Up in Karaj

Spotlight on Political Prisoners in One Iranian City – HRW 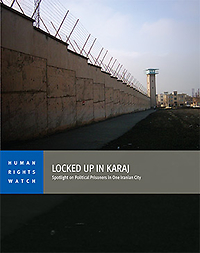 The 59-page report is based on a review of 189 cases in three prisons in the city of Karaj, near the capital, Tehran, including the charges they faced, details of their trials before revolutionary courts, and information from lawyers, prisoners’ families, and others. Human Rights Watch concluded that in 63 of these cases, authorities had arrested the prisoners, and revolutionary courts had convicted and sentenced them, solely because they exercised fundamental rights such as free speech and rights to peaceful assembly or association. In dozens of other cases, including 35 prisoners sentenced to death on death row for terrorism-related offences, Human Rights Watch suspects egregious due process violations that may have tainted the judicial process.
Read the Press Release
Read the Report
ISBN: 978-1-62313-1531