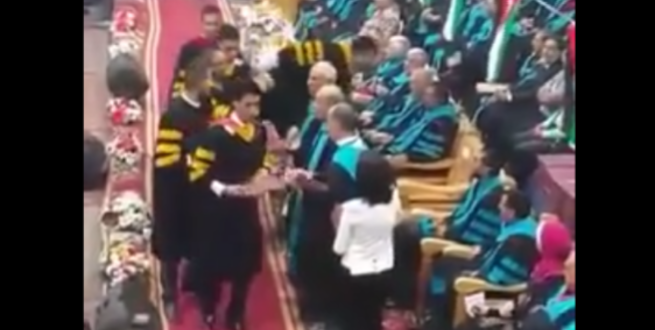 Jordan: student spits at professor during graduation ceremony at a university

In  Irbid, Jordan , Social media users  called for measures against a student after he  spat at a faculty member at Jadara University  during a graduation ceremony, while he was queuing to receive his certificate

The university has also sent a letter to the Ministry of Higher Education and Scientific Research asking not to grant or accredit the student’s bachelor’s degree.

At the police station, the student claimed that he did that  because he was not satisfied with his grade point average.

Two more students were also involved in some riots at the graduation ceremony. One of them was expelled and the other one was suspended for two semesters.

The video, which went viral on social media, triggered angry reactions from users with many calling for firm measures against those Students who commit violations against professors and instructors at universities.