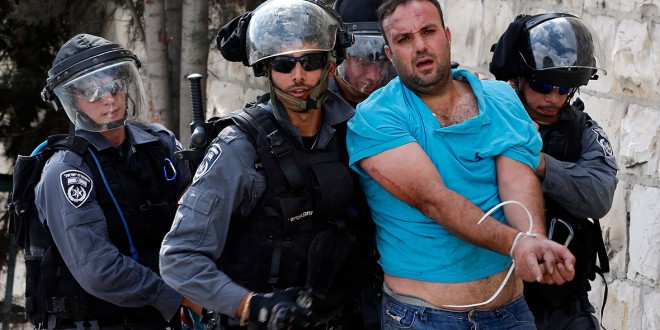 On Wednesday, Israeli policemen and Palestinian protesters clashed in Jerusalem after the authorities limited access to Muslim worshippers in at the Al-Aqsa mosque compound.

Four Palestinians were held by the police, as three policemen were injured during the clashes, Luba Samri, a spokeswoman for the police, said.

The police also reportedly used stun grenades at a crowd of around 400 people that had gathered in front of the mosque.

For the second time in the past seven days, authorities allowed only limited access to the compound, with only Palestinians over the age of 50 allowed access to the mosque.

The clashes on Wednesday were the latest in a series of confrontations between the Israeli police and the Palestinians in Jerusalem – on Monday, protesters angered by Jews being allowed into the compound clashed with police after morning prayers.

The site, considered the third holiest site in Islam, is a frequent scene of violence and houses the Al-Aqsa mosque and the Dome of the Rock. The compound is also revered by the people of the Jewish faith as the site of the biblical Jewish temple, considered their holiest place.

Non-Muslims are allowed inside the complex with police regulation, but Jews are not allowed to pray at the compound as the authorities fear that it could provoke major disturbances; the instead pray at the Western wall of the compound.

On Tuesday, Israel’s Public Security Minister Yitzhak Aharonovitch threatened to close down the site completely if people from both faiths can’t pray peacefully.

“We want (the compound) to stay open for Muslims and Jews, but if Jews can’t go there, neither can Muslims”, Aharonovitch was quoted saying on Israeli military radio.

Tensions between members of the two communities have spread to other neighborhoods of east Jerusalem – on Tuesday, a Palestinian was assaulted by three Israelis, while a tram and a bus with Israelis was pelted with stones.