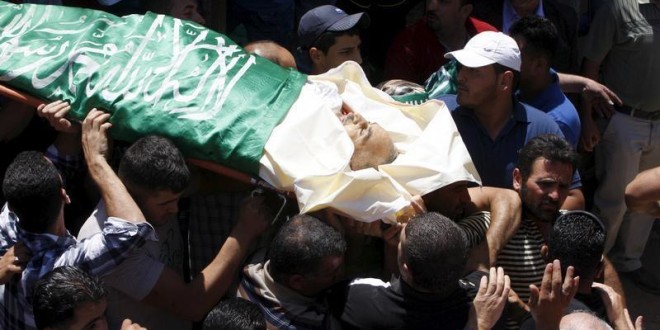 Mourners carry the body of Palestinian man Falah Abu Marya, 53, during his funeral in the village of Beit Ummar near the West Bank city of Hebron July 23, 2015 © 2015 Reuters

(Ramallah) – Family members are challenging the Israeli military’s version of the July 23, 2015 fatal shooting of a 53-year-old Palestinian man.

Three family members, who said they were present when Israeli soldiers fatally shot Falah Abu Marya in the chest after shooting and wounding his son, told Human Rights Watch that the soldiers opened fire against both men without facing real danger. This contradicts the military’s account on the day of the shootings that that soldiers shot the son after he attacked a soldier and that Israeli forces were acting in self-defense when they killed his father.

“Yet again the Israeli army says shootings of Palestinians were justified even before carrying out an investigation,” said Eric Goldstein, deputy Middle East director. “An investigation worth the name would assess forensic evidence and talk to all witnesses, including the family members, before reaching conclusions.”

Soldiers banged on the front door and Falah Abu Marya, the father, and two of his sons, Muhammad and Nabil, went to the door, Muhammad Abu Marya said. Ahmed Abu Marya, a son who lives with his wife in a separate ground-floor apartment, said he opened his door, which is adjacent to his father’s door, at the same time and saw about 10 uniformed soldiers enter the house and another 30 or 40 spread out in front of the house.

Muhammad Abu Marya said soldiers demanded his identification card when they entered. He said he asked the soldiers not to enter while the women covered themselves and moved the children to another room. As he was heading upstairs to get his ID, a soldier shot him in the groin and thigh, he told Human Rights Watch from his bed in Al-Ahli Hospital in Hebron on July 25.

“They had no reason to shoot me,” he said. “I was unarmed and half-asleep. All I asked for was to give us time to get the IDs and to let the women get dressed.”

An Israeli military spokeswoman, quoted in the Times of Israel and the United Kingdom’s Daily Telegraph said that soldiers were conducting a house raid to arrest Muhammed Abu Marya when “one man attacked a soldier who in response shot him in a lower limb.” The Israeli Defense Forces (IDF) has not since arrested Muhammad.

Muhammad’s brother Ahmed Abu Marya said he asked the soldiers whom they wanted to arrest but the soldiers refused to respond. “A soldier then hit me with his rifle and broke my nose. I needed 10 internal stitches,” Ahmed said. The stitches were visible when Human Rights Watch interviewed him in Beit Ummar on July 25.

Both Ahmed and Muhammad said that in past arrest operations, soldiers always named the family member who they were looking for and let family members get their IDs. Muhammad Abu Marya had served time in prison for throwing rocks, said their mother, Fayiqa Za’aqiq.

Beit Ummar is partly located in the area designated under the Oslo Accords as Area B and partly in Area C. The Israeli military retains control over both areas, although Palestinian security forces share control in Area B.

According to the Abu Marya family members Human Rights Watch interviewed and to the Israeli military spokeswoman quoted in the Times of Israel and the Daily Telegraph, the soldiers left the house after shooting Muhammad Abu Marya without arresting anyone. The spokesperson did not explain why the IDF did not arrest anyone, the Telegraph reported.

A few minutes after the troops left the house after shooting Muhammad, a soldier fatally shot Falah Abu Marya in the chest as he stood on the house’s balcony, one flight up, said Ahmed Abu Marya and his wife, Sara Abu Marya. Falah Abu Marya, a carpenter, had run to the balcony to shout for neighbors to call an ambulance after Muhammad was shot, they said. Ahmed was outside the house at the time and Sara and her young daughter were beside Falah, they said.

A military spokeswoman told the New York Times later that day that soldiers fired toward “the main instigator” as a “mob hurled rocks and bricks” at them. The Daily Telegraph, quoted a spokeswoman saying that she “would assume the rock throwing lasted for 10 or 20 minutes.”Haaretz cited unidentified military sources saying that Falah Abu Marya “participated in throwing boulders and cinderblocks at the soldiers while they were leaving the village.”

Ahmed and Sara Abu Marya dispute this version of events. They said Falah shoved a plastic pail on the balcony’s railing toward the soldiers standing outside the house, but it fell some distance away from them. Then, they said, they saw a soldier fire at Falah without warning.

“I saw the laser of the gun on my father’s body,” Ahmed Abu Marya said. “He shot him and ran off.” Apart from the plastic bucket his father had thrown in the general direction of the soldiers, Ahmed said he saw no one throwing stones or otherwise endangering the soldiers at the time the soldier opened fire. He said that there was no one except for the family at the scene, who were busy tending to Muhammad. Sara also said the family was alone during the incident. “It was late at night everyone was sleeping,” she said. “The neighbors didn’t come to our aid until the ambulance left.”

Sara Abu Marya said three bullets hit her father-in-law in the upper body as he stood next to her on the balcony. “He turned to me and fell to the ground,” he said. “He said, ‘They killed me,’ and then recited a verse of the Quran.”

Human Rights Watch observed a bullet mark on the outer wall of the balcony near where Falah Abu Marya was killed.

The New York Times and Daily Telegraph said that the military spokeswoman they interviewed said the army would conduct an investigation into the incident. The military police criminal investigations division, which works under the direction of the military advocate general, had not yet contacted any member of the Abu Marya family, Nabil Abu Marya told Human Rights Watch on July 28.

International standards governing the use of force by security officers during policing provide that the “intentional lethal use of firearms may only be made when strictly unavoidable in order to protect life.” Israeli open-fire orders allow soldiers to use lethal force, as a last resort, to counter a threat to life or serious injury, and, as a last resort and under specific conditions, to fire at the legs of fleeing suspects who refuse to stop when ordered to do so.

According to the United Nations, Israeli soldiers have killed 17 Palestinians since the beginning of 2015 and injured almost 1,000. Earlier this month, Human Rights Watch called for an effective investigation into an Israeli colonel’s fatal shooting of a Palestinian youth. The IDF has not yet announced the results of its investigation into the killing.

The Israeli human rights group B’Tselem has documented the Israeli military’s poor record of carrying out effective investigations into soldiers’ use of force against Palestinians. B’Tselem identified 304 cases in which soldiers killed Palestinians between 2000 and 2011, and found the military investigated only 73 of them, with 9 cases ending in an indictment. In 2011, the military changed its procedure to automatically investigate all cases in which people not taking part in hostilities were killed.

“Once again, we have two opposing versions of how the IDF killed a Palestinian,” Goldstein said. “If the IDF is unwilling or unable to weigh impartially all relevant evidence to find the truth, it should step aside for an independent body that can.”