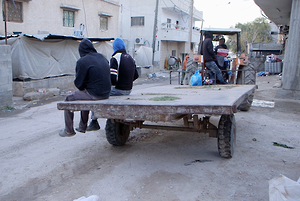 Out of School, Doing Risky Work for Low Pay – HRW

(Jerusalem) – Israeli settlement farms in the West Bank are using Palestinian child labor to grow, harvest, and pack agricultural produce, much of it for export, Human Rights Watch said in a report released today. The farms pay the children low wages and subject them to dangerous working conditions in violation of international standards.

The 74-page report, “Ripe for Abuse: Palestinian Child Labor in Israeli Agricultural Settlements in the West Bank,” documents that children as young as 11 work on some settlement farms, often in high temperatures. The children carry heavy loads, are exposed to hazardous pesticides, and in some cases have to pay themselves for medical treatment for work-related injuries or illness.

“Israel’s settlements are profiting from rights abuses against Palestinian children,” said Sarah Leah Whitson, Middle East and North Africa director. “Children from communities impoverished by Israel’s discrimination and settlement policies are dropping out of school and taking on dangerous work because they feel they have no alternatives, while Israel turns a blind eye.”

Human Rights Watch interviewed 38 children and 12 adults who work on seven settlement farms in the Jordan Valley area, which covers about 30 percent of the West Bank and where most large agricultural settlements are located.

Israeli policies that support the transfer of civilians into occupied territory and Israel’s appropriation of land and resources there for settlements violate Israel’s obligations as the occupying power under the Fourth Geneva Convention. These violations are compounded by rights abuses against Palestinians working in the settlements, including children, Human Rights Watch said. Israel should dismantle the settlements and, in the meantime, prohibit settlers from employing children in accordance with Israel’s obligations under international treaties on children’s rights and labor rights.

Virtually all the Palestinian children Human Rights Watch interviewed said they felt they had no alternative but to find work on settlement farms to help support their families.

Israel has allocated 86 percent of the land in the Jordan Valley to settlements, and provides vastly greater access to water from the aquifer beneath the valley to the settlement agricultural industry than to the Palestinians living in the valley. Israeli agricultural settlements export a substantial amount of their produce abroad, including to Europe and the United States.

Official statistics are not available, but Israeli and Palestinian development and labor rights groups estimate that hundreds of children work in Israeli agricultural settlements year-round, and that their numbers increase during peak harvesting times.

The children whom Human Rights Watch interviewed said they had suffered nausea and dizziness. Some said they had passed out while working in summer temperatures that frequently exceed 40 degrees Celsius outdoors, and are even higher inside the greenhouses in which many children work. Other children said they had experienced vomiting, breathing difficulties, sore eyes, and skin rashes after spraying or being exposed to pesticides, including inside enclosed spaces. Some complained of back pain after carrying heavy boxes filled with produce or “backpack” containers of pesticide.

Israeli labor laws prohibit youth from carrying heavy loads, working in high temperatures, and working with hazardous pesticides, but Israel has not applied these laws to protect Palestinian children working in its settlements. Israeli authorities rarely inspect working conditions for Palestinians on Israeli settlement farms. The Israeli Defense, Economy, and Labor Ministries all say that they are studying how to apply more labor protections for Palestinians working in settlements, but that in the meantime no authority has a clear mandate to enforce regulations.

Of the children interviewed for the report, 33 had dropped out of school and were working full-time on Israeli settlements. Of these, 21 had dropped out before completing the 10 years of basic education that are compulsory under Palestinian as well as Israeli laws.

“So what if you get an education, you’ll wind up working for the settlements,” one child said.

Teachers and principals at Palestinian schools in the Jordan Valley said that children who worked part-time on settlements during weekends and after school were often exhausted in class.

All of the children and adults working for the settlement farms whom Human Rights Watch interviewed said they were hired by Palestinian middlemen working for Israeli settlers, were paid in cash, and did not receive pay-slips or have work contracts. Israel denies Palestinian authorities jurisdiction in the settlements as well as much of the Jordan Valley, but they should do more to enforce laws against child labor by prosecuting middlemen, Human Rights Watch said.

Other countries and businesses should uphold their own responsibilities not to benefit from or contribute to the human rights abuses against the Palestinians in the West Bank by ending business relationships with settlements, including imports of settlement agricultural produce, Human Rights Watch said.

“The settlements are the source of daily abuses, including against children,” Whitson said. “Other countries and businesses should not benefit from or support them.”