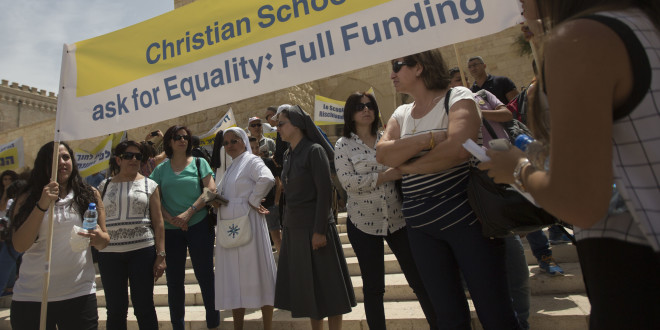 In this photo taken Wednesday, May 27, 2015, Arab Israeli Christians hold signs during a demonstration in front of the education ministry in Jerusalem. (AP Photo/Sebastian Scheiner)

In Israel and east Jerusalem Christian schools have threatened to stay closed for Tuesday’s start of the new academic year because of a financing dispute with the government.

The director of schools overseen by the Custody of the Holy Land, Abdel Massih Fahim, said  that the shutdown  was planned to demand equal treatment with other schools in Israel.  He added that the schools had  not received any  response from the education ministry on their demands .

Traditionally, the schools received 65 percent of their budgets from the state, with parents paying the balance. But that figure was cut to 34 percent two years ago, sharply increasing the amount parents had to come up with. School officials have pressed for a return to the 65 percent funding figure.

Almost  33,000 students attend the 45 Christian schools, which employ 3,000 teachers in Israel and east Jerusalem. The student population at the schools is 60 percent Christian and 40 percent Muslim. And The schools have a history predating Israel’s foundation in 1948 and are run primarily by the Roman Catholic Church.

According to Israeli official figures, 160,000 Christians live in Israel and 14,000 in live in  east Jerusalem.

The talks are taking place at a time when Christians in Israel are under growing strains, with leaders of their communities saying they are afraid in the wake of attacks by Jewish extremists on churches and other properties.