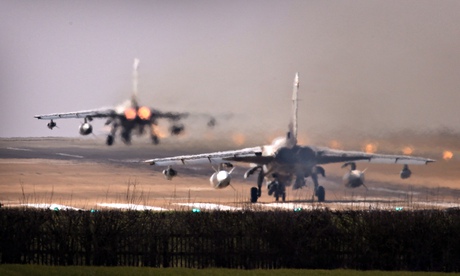 On Tuesday, British fighter jets struck an artillery post and bombed an armed truck used by extremist group Islamic State (IS) in Iraq, as the Royal Air Force launched its first strikes in the current US-led air campaign.

“Tornado jets have carried out first air strikes in support of democratic Iraqi government”, read the tweets of the ministry.

However, the ministry did not indicate where and when the strikes had been carried out, but said that local Kurdish fighters in the area supported the strikes.

“I can confirm that the RAF were in action today in support of the Iraqi government in northwest Iraq”, Defense Secretary Michael Fallon said. He added that the strikes were conducted by two jets based in Cyprus.

“They identified and attacked a heavy weapon position that was endangering Kurdish forces and they subsequently attacked an ISIL armed pickup truck in the same area”, he said.

The UK parliament last week approved a vote to join the US-led aerial campaign in Iraq. The strikes indicate the beginning of the UK’s latest military engagement in the country, after it pulled out all its soldiers in 2011.

Earlier in the day, British Foreign Minister Philip Hammond said that British forces will not be “panicked” into bombing Iraq.

“When we do release our weapons we have to be absolutely sure that they are against ISIL targets, that they are not going to kill innocent Sunni Muslim civilians in areas that are occupied by ISIL. Otherwise we are having the opposite of the effect we are intending to have”, he told the BBC.