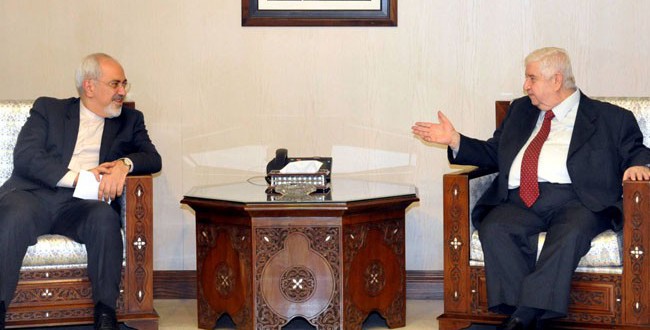 Iranian and Syrian Foreign Ministers on Monday condemned Israeli airstrikes near Damascus, labeling them as acts of aggression which proves that Israel is allied with extremist groups battling the Syrian regime.

On Sunday, Israeli warplanes had bombed two areas, launching strikes near Damascus international airport and a town near the Syrian-Lebanese border. The Syrian government has said that the strikes have caused material damage; the Israeli government hasn’t commented on the strikes yet.

At a joint conference in Tehran, Syrian Foreign Minister Walid al-Muallem on Monday claimed, without elaborating, that Israel was trying to make up for losses incurred by extremist groups at the hands of the Syrian army. He also said that Iran is backing the latest Russian attempt to end the over three year long Syrian civil war.

A Syrian opposition delegation will travel to Moscow this week; Syrian regime members discussed the new peace process in the Russian capital only a few days earlier. They are set to meet with Russian Deputy Foreign Minister Mikhail Bogdanov and talk about a political solution and the role of the opposition in Syria.

“I heard Mr. Zarif support this plan. There is no doubt Iran will help achieve a political solution”, Muallem said.
A plan by Staffan De Mistura, the UN envoy to Syria, to locally “freeze” fighting in Syria and allow aid deliveries will also be discussed in Moscow. Syrian President Bashar Assad had called De Mistura’s plan “worthy of study” last month.

Iran is Syria’s main ally, and has acknowledged that it sent military advisers to help regime forces in the Syrian civil war.

Muallem’s Iranian counterpart, Mohammad Javad Zarif did not specifically refer to the talks in Russia, but said, “We have said from the beginning that we should find a political solution without destructive foreign intervention. All Syrian parties must be present. I hope these efforts bear fruit”.

He also referred to the battle against extremist group Islamic State (IS), saying that “there are ongoing contacts” between Syria, Iran and Iraq “because we all struggle against terrorism”.