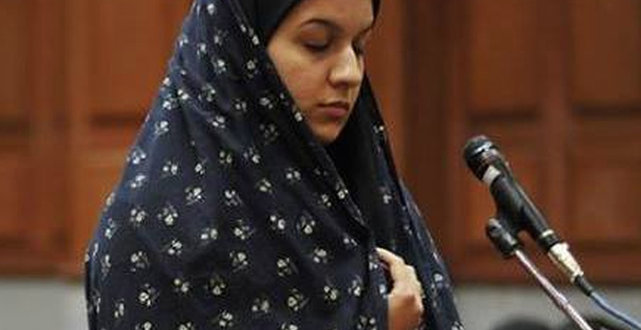 Reyhaneh Jabbari, the Iranian woman who was hanged on Saturday for killing her alleged rapist, in her final message to her mother, said that she will get her justice in “the court of God”.
The 26-year-old, who was executed despite an international campaign arguing for a seven-year prison sentence instead, left the voice message in April to her mother Shole Pakravan, the National Council of Resistance of Iran (NCRI) said before releasing an English transcript. She had recorded it when she learnt that she would be hanged, saying she had “given in” to death.

“Dear Sholeh, don’t cry for what you are hearing. The world did not love us – it did not want my fate. In the court of God I will charge the inspectors…and all those that out of ignorance or with their lies wronged me and trampled on my rights and didn’t pay heed to the fact that sometimes what appears as reality is different from it”, the transcript read.

Jabbari was handed the death sentence by a Tehran court in 2009 for the murder of Morteza Abdolali Sarbandi, an employee of the Iranian Ministry of Intelligence, who she claimed tried to rape her. The verdict was later upheld by the Iranian Supreme Court. Judges ruled that Jabbari stabbed Morteza in 2007; she admitted to stabbing him once, but said that another person killed him.
In her message, Jabbari said that she would have been murdered on that night if she had not fought back.

“My body would have been thrown in some corner of the city, and after a few days, the police would have taken you to the coroner’s office to identify my body and there you would also learn that I had been raped as well. The murderer would have never been found since we don’t have their wealth and their power”, she said.