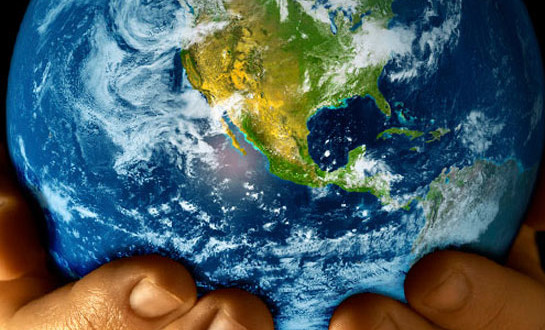 In Islam, Every Day is Earth Day

by Fatima Ashraf- the Muslim link

Earth Day was established in 1970 to raise awareness about the environment.  Islam however, did more than that; it provided clear directives for action, as early as the seventh century. The Quran is filled with verses and the Sunnah is filled with actions, on how to be ‘green’ stewards of the Earth.

The Prophet Muhammad (peace be upon him) said, “the Earth is a Mosque.” You can pray anywhere. The entire planet is meant to be a place for worship of its Creator. You can kneel down in awe and gratitude of Allah on grass, on sand, on a mountain, in a cornfield to worship. Therefore, the planet and its people deserve to be protected for its divine nature.

To demonstrate the connection between Islam and the environment, let’s talk about waste, water, watts and food. These four topics are especially important because civilizations have been built and destroyed on their ability or inability to manage them. Think about it – a society that cannot remove its trash, preserve its water, create energy, and distribute food – will not flourish. As Muslim-Americans who live in this country, we create waste, drink water, use energy, and eat food. We need to start thinking responsibly about our actions and how they impact the environment. Knowing what our Deen says about being Green is the perfect place to start.

America leads the world in waste production. We are less than 5% of the world’s population and create over 25% of the entire world’s waste.

Allah (God) says, “Corruption has appeared on the land and in the sea because of what the hands of humans have wrought. This is in order that We give them a taste of the consequences of their misdeeds that perhaps they will turn to the path of right guidance.” (Qur’an, 30:41) Scholars have cited “corruption” in this verse to be synonymous with “pollution” or “waste”.  “The path of right guidance,” means the path of justice and righteousness towards the planet.

We have become a society that takes water for granted. The average American uses 150 gallons of water PER DAY. Those in developing countries barely use 5 gallons per day. Still 1.1 billion people on the planet do not have access to safe and clean drinking water.

The Prophet Muhammad (peace be upon him) urged moderation and thriftiness in the use of water. He warned against wasting water when doing wudu, even if one lives near a river. Water is from God and should therefore be freely available to all. There is a stipulation in the Sha’riah that prohibits the sale of water. If one is selling water, for example, the bottled water vendors at Hajj, they cannot charge for the fluid. They can only charge for the cost of the packaging.

The United States consumes 5 times more watts of energy than China and renewable energy only accounts for 7% of our energy use. Non-renewable sources are extracted from the ground. They are taken from the Earth.  Renewable sources are gifts that come from above.  Allah reminds us repeatedly in the Quran of the power of the sun and wind,

“Among His Signs is this, that He sends the winds, as heralds of glad tidings, giving you a taste of His Mercy – that the ships may sail by his command and that you may seek of His Bounty…” (Qur’an, 30:46) Allah reminds us that wind is a useful blessing!

As the worlds super power and richest country on the planet, still millions of Americans do not have access to healthy food. In New York City alone, 3 million people live in “food deserts,” neighborhoods without grocery stores or access to fresh fruits and vegetables.

Allah allows us to eat heartily, but warns us against excessiveness. “O Children of Adam! Wear your beautiful apparel at every time and place of prayer: eat and drink; But waste not by excess, For Allah loveth not the wasters.” (Qur’an, 7:31) It is amazing how much food is wasted each day while millions around the globe are starving.

There is also a Sunnah of Prophet Muhammed (peace be upon him) that while eating, take the food out from the side and not the middle. Eat from the food, which is closest to you. While this Sunnah is about serving oneself food, I thought, could it also mean to buy local?

April 22, 2010 is the 40th anniversary of Earth Day.  As Muslims, how will we protect the planet, not just on this one day, but every day?  Ibrahim Abdul-Matin, author of the new book,”Green Deen: What Islam Teaches About Protecting the Planet,” is preparing to launch a nationwide movement for Muslims called “Green Ramadan.” This movement is about three things:

Getting Muslims and mosques across the country to adopt Green principles for the holy month of Ramadan; Showing the power of the Muslim community and how great our contribution to the environmental movement can be; and Inspiring Muslims to look to their Deen for guidance on how to be stewards of the Earth.

It’s time for Muslims to build a movement for everyone, every day, not just on Earth Day.

For more information about “Green Deen: What Islam Teaches About Protecting the Planet” and “Green Ramadan” visit www.greendeenbook.com.

Earth Day Green Ramadan His Bounty people 2015-04-22
Mona
السابق List of world’s most powerful passports
التالي Stuck in Area A: How We Were Duped into Disowning the Palestinians