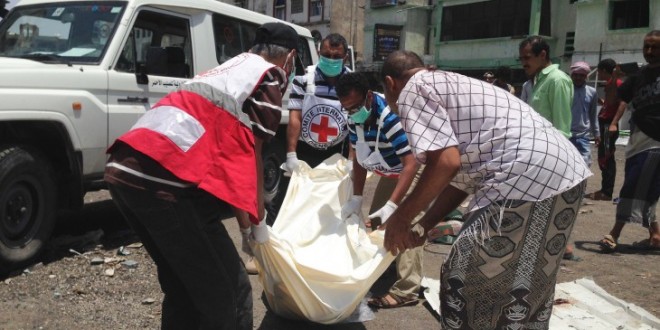 Staff from the ICRC and the Yemeni Red Crescent Society (YRCS) help to collect and transport the bodies of people who died due to fighting. / CC BY-NC-ND/ICRC/O. Chassot

On Tuesday , International Committee of the Red Cross (ICRC) said  that it was “extremely concerned” by a growing number of corpses abandoned in the war zones in Yemen.

Nourane Houas,the head of the ICRC’s Protection Department in Yemen said “With the escalation of the fighting, more casualties are being left behind owing to the increased danger associated with retrieving the wounded and the dead,”.

Houas urged all sides in the conflict “to respect the dignity of the dead and to allow their swift recovery, while taking all feasible measures to ensure their proper identification and their handover to the families”.

She  Added “Failure to identify the dead puts them in the ranks of the missing, and prevents the families from mourning,”.

The ICRC said in a statement “International humanitarian law requires that dead bodies be treated properly and with respect,” . Also, Under Islam,  official religion in Yemen, the dead should be buried the same day whenever possible.

It also added that it has helped retrieve more than 407 dead bodies since March.

Fighting has intensified since that month after Iran-backed Huthi rebels and their allies entered President Abedrabbo Mansour Hadi’s last refuge, the southern port city of Aden. Hadi fled the country and on March 26, Saudi Arabia led a coalition of Arab states in carrying out air strikes against rebel positions across Yemen.

According to The World Health Organization , the conflict had claimed 4,345 lives from March up until August 5. Half of those killed are civilians, and 80 percent of Yemen’s 21 million people need aid and protection, according to U.N. figures.