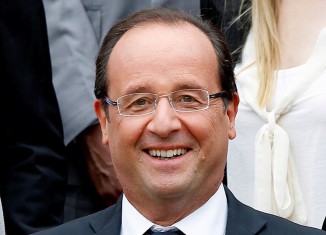 French President Francois Hollande on Thursday warned that Syrian President Bashar Assad is not the West’s ally in fighting terrorism but an ally of extremists wreaking havoc in Iraq and Syria.

“Assad cannot be a partner in the fight against terrorism, he is the de facto ally of jihadists” he said to a gathering of global ambassadors in Paris.

His comments come after the Assad regime had on Monday said that it would work with the global community, including the United States, to tackle extremists in Syria.

Hollande also spoke about other crises in the world, including in Ukraine, where the West believes Russian army forces are operating, in a four-month long conflict which has seen over 2,200 lose their lives.

“If it turns out that there are Russian soldiers present on Ukrainian soil, it would be intolerable and unacceptable”, he said.

He also spoke about Libya, and said that it was his current “major concern”, calling out the UN to provide special support for Libyan authorities as the nation slides even deeper into chaos with militias fuelling an escalating war. Different factions in the past few weeks in Libya have backed rival national assemblies and Prime Ministers, while the United Arab Emirates and Egypt have conducted air strikes against extremists.

During the weekend, extremists seized Tripoli airport, complicating a crisis which had been boiling since the overthrow of long-time dictator Mohammad Gadhafi in 2011.

“France asks the United Nations… to organise exceptional support for Libyan authorities to restore their state”, he said without giving out any details on what form the support should take.

“There is total confusion” in Libya he said.

“Jihadist groups have taken control of important sites and not only oil sites. There are two parliaments, two governments — even if for us there is only one legitimate one — and there are militias.If we do nothing… terrorism will spread to all this region”, he said.