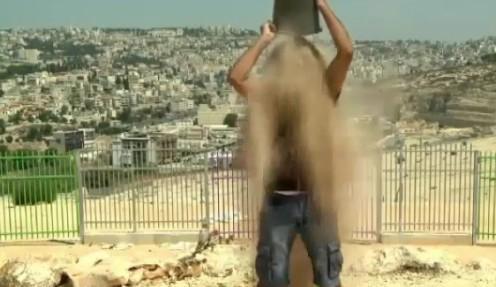 The current war in Gaza has set off several takes on the Ice Bucket Challenge, with several Palestinians dumping buckets of debris over themselves and an Israeli dumping a bucket of manure. The ice bucket challenge has been spreading across the internet, with people filming themselves pouring buckets of ice water over their heads to raise awareness and funds for Lou Gehrig’s disease.

Several thousands of people all across the world, including pop stars, billionaires and even former US presidents, have taken the challenge and donated to the charity. Subsequently, two separate awareness campaigns which have been modeled after the Ice Bucket Challenge are spreading through the Middle East, hoping to bring an end to the ongoing violence in Gaza.

In Gaza, where there is an acute shortage of water due to the Israeli bombardment, people have created the “Rubble Bucket Challenge” to show solidarity with Palestine, local journalist Ayman al-Alul said.

“We looked for a bucket of water, however the use of water is more important than to empty over our heads… so I decided to use rubble.This challenge… it is for all people who sympathize with the Palestinian people… We don’t ask for material aid… we ask for solidarity”, he said on a YouTube video.

The challenge was picked up quickly by24-year-old Palestinian singer Mohammed Assaf, who had won the 2013 edition of “Arab Idol”. Assaf, who hails from the city of Khan Yunis, is also a goodwill ambassador forThe United Nations Relief and Works Agency for Palestine Refugees in the Near East (UNRWA).

ON the Israeli side, Israeli farmer Saar Altman, living on the kibbutz of Nir Yitzhak in the “Gaza envelope” has created the “Shit Bucket Challenge”, directed specifically at Israeli Prime Minister Benjamin Netanyahu,Economy Minister Naftali Bennett and Foreign Minister Avigdor Lieberman, as they have not been able to bring an end to the violence in the region.

“I want to challenge Bibi, Lieberman and Bennett who think that with force and no long term solution they can solve all the problems of the south”, he said in a video on his Facebook page.
Related Video: