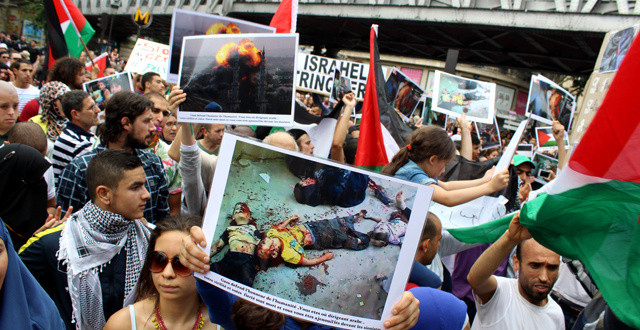 On Wednesday, Paris braced itself for a protest against Israel’s aggression in Gaza after other similar rallies ended in looting and violence.

The French government had banned several weekend rallies, but the ban had failed as the rallies went ahead despite the ban; the rallies descended into violence and chaos. The government subsequently decided to permit Wednesday’s protest after talks with organizers of the protest who gave “security guarantees”, Prime Minister Manuel Valls said.

This weekend’s protests in Paris and in the town of Sarcelles were tainted by clashes between the police and demonstrators. The police force dispersed local crowds using tear gas shells, and arrested several dozens of people. In an earlier demonstration in Paris, protestors attempted to storm synagogues; in a previous demonstration in Sarcelles, many Jewish businesses were looted, which prompted Roger Cukierman, head of France’s main CRIF Jewish group, to express fears of “pogroms”.

National Collective for Just and Durable Peace between Israelis and Palestinians, the main organizer of the protest to be held on Wednesday, hailed the government’s decision to approve the demonstration.

“It’s a victory for democracy and freedom of expression”,President of the France-Palestine Solidarity Association Taoufiq Tahani said. The group was among those who had called for the rally.