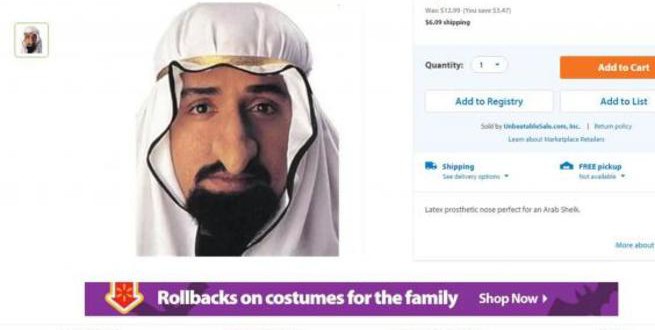 Lately Walmart dropped two costumes from its Halloween collection after they  had caused  controversy on social media.

The two  controversial costumes are an IDF soldier and a “Sheikh Fagin nose”, a latex nose which was described in the website  as the  “perfect for an Arab Sheikh”.

The “Sheikh Fagin nose,”  is a reference to the Jewish antagonist in Oliver Twist, was denounced by the American-Arab Anti-Discrimination Committee  and expressed its concern that the nose would be used in “racist anti-Arab costumes.”

On the other hand ,The  Israeli soldier’s costume drew strong criticism from people who accused Walmart of “supporting killing and occupation”.

But while Walmart has dropped the two products, they still available elsewhere. The latex nose is on sale on Amazon’s website with   other name, the “Sultan Nose the IDF soldier’s costume is also still available on same website.