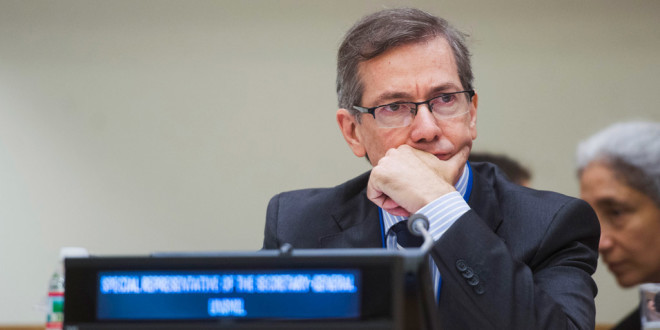 UN Libya Mission encouraged by “step in the right direction”

The United Nations Support Mission in Libya (UNSMIL) on Wednesday said that it is heartened by the positive response to its invitation for political dialogue.

“The move by the parties to identify their respective delegations to the talks is a step in the right direction. In agreeing to take part in this dialogue, all the parties have clearly signalled their determination to spare no effort towards safeguarding Libya’s political transition and forging ahead with building a modern democratic state based on the rule of law and respect for human rights”, UNSMIL said.

It added that the move reflects the commitment of all parties involved to find peace in the country and a resolution to its current military and political crisis through dialogue. It also said that the mission will continue consulting with everyone involved in the next few days to finalize preparations, including details of the timing and venue.

Despite the developments, fighting continued in the crisis-stricken country, with both sides working to consolidate their positions in the “oil crescent” area, the region between Sirte and Benghazi in Libya. In its statement, the mission said that it was “deeply alarmed” by the escalation which undermines their efforts to convene a dialogue and will likely negatively impact Libya’s economy.

“All parties should desist from any action that obstructs the dialogue efforts and endangers the country’s economic lifeline. Libyan oil is a strategic asset that belongs to all the Libyan people, who deserve an opportunity for stability and prosperity”, the mission added, calling for an immediate disengagement of all parties near the Oil Crescent region.

The statements warned that continued escalation risked worsening “an already disastrous situation”, stressing that parties threatening Libya’s security, stability or peace could be sanctioned. Bernardino Leon, the Special Representative of the Secretary-General for Libya, will next week will brief the Security Council on progress made on the dialogue and on the escalation of hostilities.