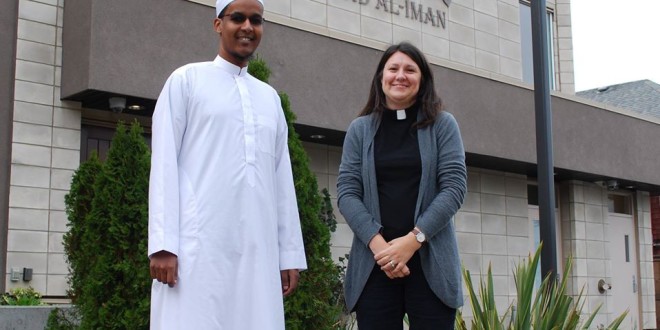 Muslims and Christians work together  to bring refugees to  Canada

Muslims and Christians formed a partnership to bring refugee families to Victoria.They will work to help families that fled violence  in Syria and Iraq. The partnership  is formed between  Masjid Al-Iman  ,  Oak Bay United Church and St. Aidan’s United Church in Saanich.

Ismail Mohamed Nur, the mosque’s imam said “The groups are a good match… the Muslim community is “very happy” to be able to work with the Christian groups”.  He added ,“It’s something that’s been echoed on their side, as well… One of the things that we’ve been talking about when we’ve gotten together is the fact that these kinds of issues, it makes us put our differences aside.”

Nur said that despite the differences   between Christianity and Islam there are  many  things in common, like  helping people . He  added  “This is a real-case scenario where our action or inaction will actually affect people’s lives.”

Nur  said “The first part of helping those people is to bring them to a better place, to Canada, but that’s just half of the story,The second part is helping them integrate into society and taking care of their needs.”

He added ” the Muslim community was already raising funds for the Syrian people when representatives from the churches reached out…I’m very grateful the Christian community took it upon themselves that they wanted to make this a reality.”

Rev. Michelle Slater of Oak Bay United Church said    her congregation was galvanized by images of three-year-old Syrian boy Alan Kurdi lying dead on a Turkish beach. who drowned along with his mother and brother as they attempted to get to Europe by boat.

She said “We quickly contacted the national United Church because it’s through their sponsorship agreement that we would sponsor refugees, And immediately we thought whether we sponsor Syrian refugees or someone else from that part of the world, they’ll likely be Muslim From there, it was decided to contact the Muslim community” .

She added “We are so grateful to have an opportunity to make a concrete difference in the lives of families in need, and at the same time, to build relationships with our neighbours of a different faith,” .

An event held to the public  to find out more about helping refugees seeking to resettle. It at the mosque at 2218 Quadra St., with guest speakers from the Victoria Immigrant and Refugee Centre Society, the National Zakat Foundation and the B.C. Muslim Association.