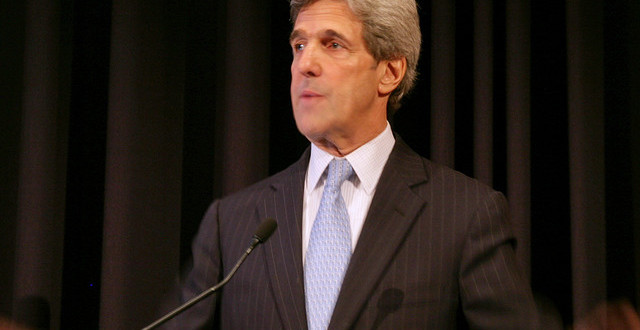 US Secretary of State John Kerry is reportedly set to meet with Palestinian President Mahmoud Abbas during his scheduled trip to London on Wednesday, a few weeks after peace talks between Palestine and Israel, brokered by the US, collapsed. According to sources, the two will talk about the resumption of the peace talks with Israel.

However, John Kerry’s spokeswoman Jen Psaki denied any such plans, telling reporters that “there’s no meeting planned” with Mahmoud Abbas during the trip. She added that Kerry is set stop in London to discuss the ongoing conflict in Syria.

The US brokered peace talks were completely derailed well ahead of the April 29th deadline, as Israeli and Palestinian leaders exchanged recriminations and went back on commitments they had made during nine months of meetings. Sources say that Kerry is set to meet with Abbas on Wednesday as a last-ditch attempt to revive the negotiations.

If the peace talks resume, Kerry has said that both sides need to work on the future boundaries of a Palestinian state, security arrangements in Israel and other key issues like Jerusalem and refugees. Most of the last round of talks gave precedence to the security issue in Israel over the issues of refugees and future borders. During the last round of negotiations, Israel had announced the establishment of thousands of new settlements in West Bank, land which Palestinians want for their future state.

In March, Israel had backtracked on a pledge it made when the talks began in July 2013, to release the last batch of veteran Palestinian prisoners. Their failure to keep their pledge led Abbas to break his own commitments and seek membership of many international treaties. The Palestine Liberation Organization then surprisingly signed a reconciliation agreement with Hamas, generally considered their rivals, on April 23rd; Israeli immediately pulled out of the negotiations after the deal.

In  Tehran, court has fined two women $260 for violating the Islamic dress code by …