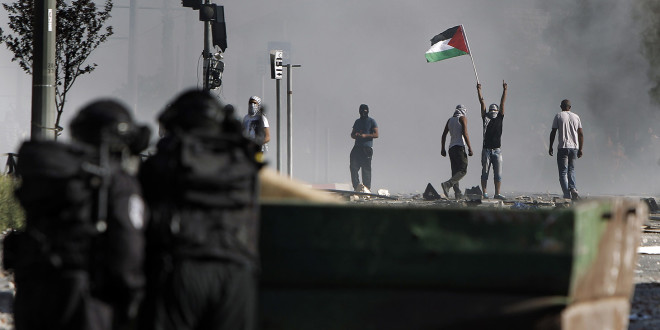 Jerusalem chaos is a warning of things to come

Among Palestinians and Israelis, the recent upsurge in violence has been variously described as the children’s, lone-wolf, Jerusalem and smartphone intifadas. Each describes a distinguishing feature of this round of clashes.

The steady erosion of Fatah and Hamas’ authority during the post-Oslo years, as the Palestinian factions proved incapable of protecting their people from the structural violence of the occupation, has driven Palestine’s orphaned children to the streets, armed with stones.

The growing hopelessness and sense of abandonment have led a few so-called “lone wolves” to vent their fury on Israelis with improvised weapons such as knives, screwdrivers and cars. These attacks have attracted the most publicity, becoming the equivalent of the second intifada’s suicide bomber. But they serve chiefly as a barometer of Palestinian despair.

Jerusalem is the centre of events, with the Palestinians’ only unifying symbol, Al Aqsa mosque, at its heart. For Palestinians, the incremental takeover of the compound – and the West’s indifference – is like watching the mass dispossession of 1948 play out again in slow motion.

In addition, Jerusalem is the main fault line. Israel’s illegal annexation of the city has left Palestinians there in an extreme form of isolation – indefinitely stateless and supremely vulnerable.

And finally, the smartphone camera has allowed Palestinians to document their suffering and witness unmediated their compatriots’ personal acts of resistance and self-sacrifice.

Futile knife attacks may appal outsiders, but for many Palestinians they are the moment when an individual briefly reclaims his or her agency and fights back on behalf of a collectively subjugated and humiliated people.

The need for so many different labels for these events reveals another important facet of the current Palestinian struggle: its disorganised nature.

Israel has almost completed the division and enclosure of Palestinians into disconnected enclaves. As they hear the sound of the prison doors closing, Palestinian youths are lashing out at the guards closest to hand.

Because the divisions between Palestinian populations have become so entrenched geographically, and their leaders politically, it is hard for Palestinians to find any unifying vision or organising principle. Do they fight first against their occupiers or their spent leadership?

But the lack of planning and discipline has exposed Israel’s own limitations too.

Israel has little but stopgap measures to defend against the protests. Its intelligence agencies cannot predict the lone wolf, its guns cannot deter the knife, its military might cannot subdue the craving for justice and dignity.

Strangely, in the face of all this, there are signs of a parallel breakdown of order and leadership on the Israeli side.

Lynch mobs of Jews patrol Jerusalem and Israeli cities, calling out “Death to the Arabs!” A jittery soldier causes pandemonium by firing his rifle in a train carriage after a bogus terror alert. An Israeli Jew stabs another because he looks “Arab”.

Meanwhile, politicians and police commanders stoke the fear. They call for citizens to take the law into their own hands. Palestinian workers are banned from Jewish towns. Israeli supermarkets remove knives from shelves, while 8,000 Israelis queue up for guns in the first 24 hours after permit rules are eased.

Some of this reflects a hysteria, a heightened sense of victimhood among Israelis, fuelled by the knife attack videos. But the mood dates to before the current upheavals.

It is also a sign of the gradual leaching of the settler’s lawlessness into the mainstream. A popular slogan from the past weeks is: “The army’s hands are tied.” Israeli civilians presumably believe they must take up arms instead.

After six uninterrupted years of the extreme right in power, Israelis don’t blame their government’s policy of relentless force for the backlash. They demand yet more force against the Palestinians.

Polls show Avigdor Lieberman, the former Moldovan bouncer who became the hard man of the Israeli right, is most favoured to lead the nation out of the crisis.

Solutions are being applied most savagely in East Jerusalem, where Palestinians are being locked even more tightly into neighbourhood ghettoes. Israel’s “eternal, unified capital” is being carved up by roadblocks. Palestinian residents are made to endure daily searches and insults that will sow the seeds of yet more fury and resistance.

As Israel tries to slam shut the door of one prison cell in Jerusalem, the inmates threaten to break open the door of another, in Gaza. Israel’s leadership has watched uneasily the repeated breaches of Gaza’s fence over the past week by youths enraged by their own misery and what they see happening in the other prison wings.

The current unrest may recede, but more waves of protest of ever greater intensity are surely not far behind.

Jafar Farah, a Palestinian leader in Israel, has warned of it heading slowly from a national conflict into a civil war, one defined by the kind of debased one-state solution Israel is imposing.

The chaotic violence of the past weeks looks like a warning from the future – a future Israel is hurtling towards.