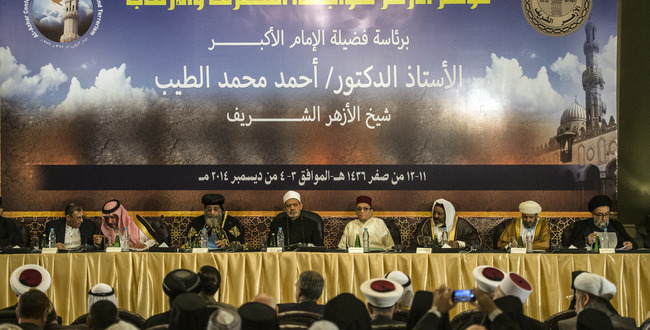 Al-Azhar University, the most prestigious center of learning for Sunni Islam, urged Christians living in the Arab world on Thursday to stand firm in resistance and not flee in the face of extremist violence. The call comes days after Pope Francis urged Muslim leaders to criticize extremists using Islam as a crutch, especially groups like al-Qaeda and Islamic State, and for an end to persecution of Christians in the Arab world.

“We condemn the forced exile of Christians and other religious or ethnic groups. We urge Christians to stay rooted in their homelands and to weather this wave of terrorism we all are suffering”, Al-Azhar said in its final statement at a conference it organized.

It also said that extremists are trying to distort the meaning of the word jihad, saying that it is of “self-defense or repelling aggression and should not be left to a single individual or group to declare”.
“All armed groups and sectarian militias who use violence and terrorism… have no relationship with true Islam”, it said.

In its wave of violence though Iraq and Syria, the IS has also oppressed Christians by forcing to choose between paying protection money, converting to Islam or fleeing their homeland.
The Cairo conference did not offer a firm plan to curb extremists, but called for an international forum to “spread justice and respect for different beliefs”.

Pope Francis had on Sunday that on his visit to Turkey, he told Turkish President Recep Tayyip Erdogan that “it would be wonderful if all the Muslim leaders of the world — political, religious and academic — spoke up clearly and condemned” extremism.

“That would help the majority of Muslims if that came from the mouths of these political, religious and academic leaders. We all have need of a global condemnation”, he said.

Al-Azhar head Sheikh Ahmed al-Tayeb on Wednesday directly criticized the IS for its “barbaric crimes” and urged the US to crack down on nations that support extremists militarily and financially.