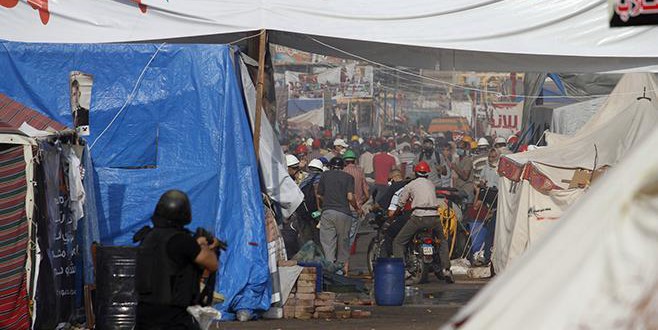 An officer from the Egyptian Central Security Forces (CSF) takes aim at a crowd of retreating protesters as security forces disperse the Rab’a sit-in on August 14, 2013. © 2013 AFP/Getty Images

Egyptian authorities have held no government official or member of the security forces responsible for the mass killing of protesters in Cairo’s Rab’a al-Adawiya Square two years ago. On August 14, 2013, security forces killed at least 817 people and most likely more than 1,000 at a mass sit-in in what probably amounted to crimes against humanity.

Given the Egyptian government’s refusal to properly investigate the killings or provide any redress for the victims, the United Nations Human Rights Council should establish an international commission of inquiry into the brutal clearing of the Rab’a al-Adawiya sit-inand other mass killings of protesters in July and August 2013. The African Commission on Human and Peoples’ Rights should establish a similar investigation.

“Washington and Europe have gone back to business with a government that celebrates rather than investigates what may have been the worst single-day killing of protesters in modern history,” said Joe Stork, deputy Middle East director. “The UN Human Rights Council, which has not yet addressed Egypt’s dangerous and deteriorating human rights situation, is one of the few remaining routes to accountability for this brutal massacre.”

The United States and Egypt’s European allies, rather than seriously addressing the rank impunity of President Abdel Fattah al-Sisi’s government, contend that it is a national security priority to resume their relationships with Egypt, including providing Egypt with military aid and hardware.

The dispersal of the Rab’a al-Adawiya Square sit-in, where the crowd reached 85,000 at its height, was the worst of these incidents. The government announced its intention to clear the sit-in but did not announce a date. At first light on August 14, security forces using armored personnel carriers and snipers fired on the crowd with live ammunition shortly after playing a recorded announcement to clear the square through loudspeakers. Police provided no safe exit and fired on many who tried to escape.

Authorities had anticipated a high number of casualties; both Interior Minister Mohamed Ibrahim and Prime Minister Hazem al-Beblawy said publicly after the dispersal that they had expected that more protesters would have been killed. A year later, al-Beblawy was quoted as saying in an interview with al-Masry al-Youm, an independent newspaper, that “all options were bad” for resolving the sit-in and that anyone who “committed a mistake” should be sent to court.

The widespread and systematic nature of these killings, and the evidence Human Rights Watch collected, suggests that the killings were part of a policy to use lethal force against largely unarmed protesters, making them probable crimes against humanity.

In December 2013, the Egyptian government established the June 30 Fact-Finding Committee, named after the date on which protests against the Morsy government began, to look into the killings and the events that precipitated and followed them. The government released an executive summary of the committee’s findings on November 26, 2014, that did not recommend charges against any government official or member of the security forces.

The government has not released the full report and has not signaled any intention to do so. The Prosecutor General’s office, which has the prerogative and responsibility to open criminal investigations, has not announced any charges. On July 16, al-Sisi’s cabinet approved renaming Rab’a square after Hisham Barakat, the prosecutor general who gave legal approval to the 2013 dispersal and who was assassinated in June.

The only prosecution to emerge from the mass killings of July and August 2013 concerned the suffocation deaths of 37 protesters on August 18, 2013. The men, who had been arrested at the Rab’a dispersal, died after a policeman fired a teargas canister inside the overcrowded prison van where they were temporarily held. On August 13, 2015, a court reduced a 10-year sentence for a police lieutenant colonel involved in the deaths to 5 years following a retrial. The case could still proceed to Egypt’s highest appellate court. Three lower-ranking officers have all received one-year suspended sentences.

Police arrested hundreds of protesters during the Rab’a sit-in dispersal and held them in pretrial detention for nearly two years. On August 12, prosecutors referred the case to trial, accusing the protesters of a number of crimes, including blocking roads and harming national unity. Al-Shorouk, an independent newspaper, reported that prosecutors have not disclosed the number of protesters being sent to trial, though lawyers believe that more than 400 are being held.

US officials have refrained from characterizing Morsy’s removal as a coup, which would have triggered the immediate halt of military aid. But after the Rab’a killings, the US cancelled planned joint military exercises with Egypt and announced a review of “further steps that we may take as necessary with respect to the US-Egyptian relationship.”

In October 2013, the US suspended the delivery of four major weapons systems to Egypt. In August 2014, it lifted that suspension and delivered 10 Apache attack helicopters. In March 2015, the administration lifted all suspensions, allowing delivery of 12 F-16 fighter jets and up to 125 M1A1 tank kits, while also announcing plans to tighten restrictions on Egypt’s military aid buying power. In August, Secretary of State John Kerry went to Cairo to lead the first Strategic Dialogue with Egypt since 2009.

“The lack of justice for the victims of the Rab’a massacre and other mass killings is an open wound in Egyptian history,” Stork said. “Addressing this crime is necessary before Egypt can begin to move forward.”