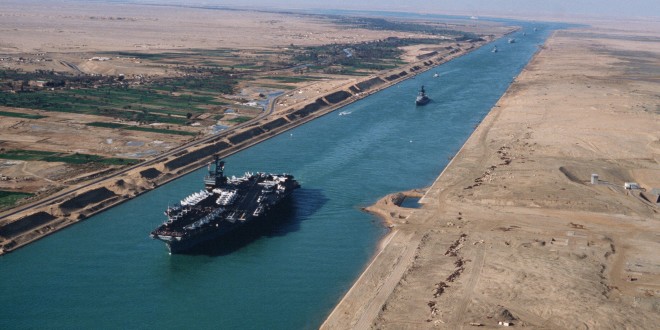 On Saturday , officials and state media said that  Egypt began the first trial run of its “new Suez canal” before the formal inauguration of the new shipping route next month.

Dubbed the Suez Canal Axis, the new 72-kilometer  project aims to  speed up traffic along the existing waterway by reducing the waiting period of vessels, and  boosting revenues for Egypt.

It will run part of the way along the existing canal that connects the Red Sea to the Mediterranean.

The fleet sailing from south to north had vessels flying flags of Singapore, Luxembourg and Bahrain. Those sailing from north to south had flags from Liberia, Singapore and Hong Kong.

The new waterway involves 37 kilometers of dry digging and 35 kilometers of expansion and deepening of the Suez Canal, in a bid to help speed up the movement of vessels.

president Abdel Fattah al-Sisi launched the project in August and set an ambitious target of digging the expanded canal within a year. A ceremony will be held on August 6 to officially inaugurate the project.

Authorities raised 9 billion Dollars to build the new canal by selling shares in the project to domestic investors, with private Egyptian companies tasked with its construction. It is expected to more than double Suez revenues from $5.3 billion expected at the end of 2015 to $13.2 billion in 2023, according to official estimates.

The canal is also  part of an ambitious plan to develop the surrounding area into an industrial and commercial hub that would include the construction of ports and provide shipping services.

egypt Luxembourg Singapore Suez Canal Axis 2015-07-25
sherehan
السابق Why Palestinians Fight Back: The Logic of Life and Death in Gaza
التالي The “Arab in Black” Painting  worth  £1m with Nelson Mandela link found in London