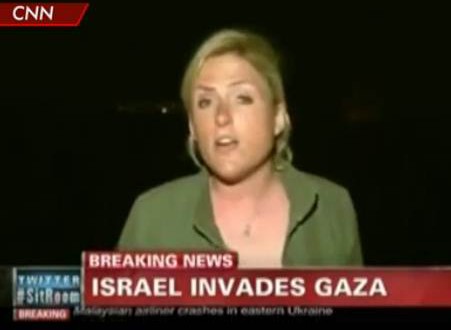 CNN reporter Diana Magnay was re-assigned to Moscow from the Israel-Gaza conflict after she posted a tweet in which she referred to a group of Israelis who were cheering at missiles aimed at Gaza as “scum”. She had then deleted the post and has since not tweeted.

On Thursday, several Israelis had appeared in the background of one of her segments, in which Magnay spoke of the “astonishing, macabre and awful thing to watch this display of fire in the air”.

After her segment aired, she posted on Twitter: “Israelis on hill above Sderot cheer as bombs land on #gaza; threaten to ‘destroy our car if I say a word wrong’. Scum”

A spokeswoman for CNN clarified that the “scum” comment in her tweet was a reaction to the group of people in her segment and not all Israelis.

“After being threatened and harassed before and during a live shot, Diana reacted angrily on Twitter”, a spokeswoman for CNN told Michael Calderone of The Huffington Post on Friday morning.

“She deeply regrets the language used, which was aimed directly at those who had been targeting our crew”.
However, the tweet as able to get Magnay re-assigned to Moscow, the spokeswoman added.

Magnay’s removal from the conflict in Gaza came only a day after NBC pulled its experienced Middle East reporter Ayman Mohyeldin from the region over “security concerns”, according to Glenn Greenwald from The Intercept.

Mohyeldin was one of many journalists on the ground in Gaza when 4 Palestinian children were killed on a beach in Gaza by Israeli missiles. In spite of the reported security concerns, Mohyeldin was replaced by Richard Engel, chief foreign correspondent for NBC News. NBC News had refused to answer questions on the removal of Mohyeldin and has attracted criticism from several of his fellow journalists. However, following criticism from numerous independent media outlets, Mohyeldin was reinstated in Gaza on Friday.