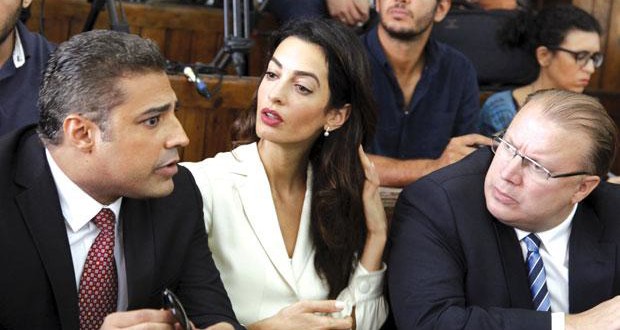 Lawyer Amal Clooney , Said   that  the Canadian government has formally applied to Egyptian authorities for the pardon and deportation of  Mohamed Fahmy   the Canadian citizen and  Al-Jazeera journalist .

Fahmy was sentenced to three years in prison, along with his  Al-Jazeera colleagues,  the Egyptian Baher Mohamed and  the Australian Peter Greste who  was deported to his  country earlier this year.  The journalists  faced terror charges and had spent more than a year in prison before a successful appeal of an earlier conviction resulted in the re-trial that culminated in the  verdict.

Judge Hassan Farid said  In his ruling  that he sentenced the men to prison because they had not registered with the country’s journalist syndicate. And because journalists used equipment without an approval of security officials to  broadcast “false news” and  also because they used a hotel as a broadcasting point without permission.

According to Fahmy’s lawyer Amal Clooney  in an interview with CBC , Pardon or deportation are the only options to save  him from Egyptian jail. She also said she’s concerned about Fahmy’s health in jail. He has “hepatitis C” and needs surgery for a shoulder injury.

Al-Jazeera has also said it will appeal the verdict once the court releases its full ruling in the next 30 days.

Lynne Yelich, minister of state for foreign affairs, said in a statement that Canada is “disappointed” and that the decision “severely undermines confidence in the rule of law in Egypt.”

Clooney said she and Troy Lulashnyk,  the Canadian  ambassador to Egypt, jointly filed formal requests on Saturday for Fahmy’s pardon and deportation.  she  Also reiterated her call for Prime Minister Stephen Harper to personally intervene in Fahmy’s case.

She added “What needs to happen now, in my view, is very high-level engagement by the government of Canada and that means Prime Minister Harper engaging directly with President Sisi,” she said. “If I were a Canadian citizen, I would want to see my prime minister now showing leadership on the global stage.”