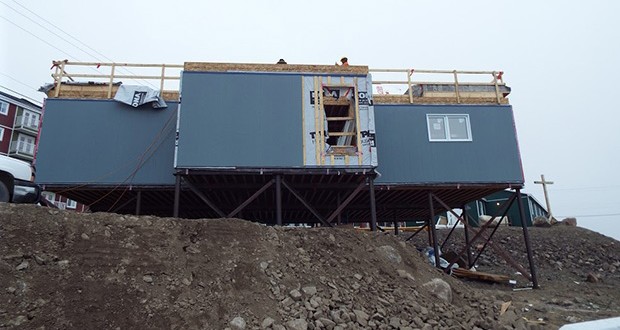 the mosque constructions In Iqaluit , Nunavut

In Iqaluit , Nunavut, the  construction is underway on the territory’s first mosque. By the end of the year the mosque will be ready to host prayers for the Muslims community in the city.

The idea for the mosque began with an engineer born in Pakistan living in Toronto called Syed Asif Ali  moved to work in  Iqaluit where there was no mosques . Syed decided to build a mosque and to help in establishing the Islamic Society of Nunavut in 2009 .later,they began the complicated process of building the mosque.

The society cooperate with the Zubaidah Tallab Foundation, from  Winnipeg to ship pre-fabricated mosque to the city  like they did to Inuvik in the Northwest Territories. They also appealed for donations from supporters around the world.

In  Ramadan  last month,  Muslims in Iqaluit’s donated and collected With the help of Shyakh Abdullah Hakim Quick, a Toronto-based Islamic scholar,  a $100,000 dollars to build and  install the heating  in the  arctic mosque:

Syed said, there are almost ten times as many Muslims in Iqaluit today as there were six or seven years ago, and the community is growing. Muslims from as far as Libya, Pakistan, and Morocco have moved to Iqaluit, and some locals have married into the faith and converted”.

He also added that the Islamic society plans to use the mosque for workshops and classes. And hopes to provide services for non Muslims .for example by establishing a food bank, to alleviate hunger in the territory .