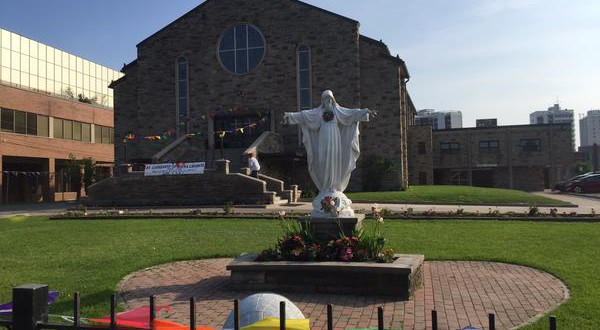 Canada : Mosque aids a Catholic church after acts of vandalism

A mosque in Mississauga, Canada, donated thousands of dollars to help a  Catholic church in the area needed a clean up after an acts of vandalism.

imam of the Sayeda Khadija Centre in Mississauga  Hamid Slimi  visited St. Catherine of Siena Roman Catholic Church after the incident. The church’s Father Camillo Lando showed him the acts of  vandalism that had been caught on security video. Later , the imam spoke to the Muslim congregation about the church’s plight and called for donations and  They gathered  5,000  $ in one day.

Slimi gave the cheque to Lando and the church board, and “told them, this is what any Muslim would do.”

The vandalism at St. Catherine of Siena Church took place in April and May.  a man entered the church, ripped pages from bibles, throw the holy books, stole property and laid a cross on the ground before he leaves. A few days later, he attacked church again and he sprayed graffiti on the adjoining school and desecrated a statue of Jesus. The estimated damage to the church’s property was about 10,000 $.

Iqbal Hessan, the man arrested for carrying out the acts of vandalism, said  he did that because he was “upset with the Christian religion”. Iqbal’s  father told the court that  his sun has been diagnosed with schizophrenia, and that’s what probably led to such behavior.