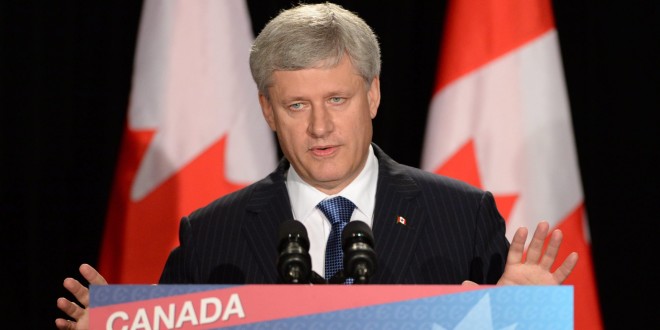 Canada : Harper pledges to welcome 10,000 refugees from Iraq and Syria

Harper used a campaign visit to pledge that a Conservative government would accept 10,000 refugees from Iraq and Syria over the next four years, despite criticism that the government has been slow to welcome the civilians it already promised to take in.

he cautioned that no amount of resettlement can address the problem of displaced civilians in the region, saying the atrocities committed by ISIS are “beyond horrific.”

Harper said “The scale of the humanitarian crisis in Iraq and Syria cannot be solved, cannot even come close to being solved, by refugee policy alone … We must stop ISIS. We can accept thousands or tens of thousands, and maybe all the countries in the world together, hundreds of thousands of refugees, but ISIS left to its own devices will create millions, tens of millions, of refugees and victims on a monthly basis.”

He said” that’s why Canada and other countries intervened to stem ISIS advances on the ground. Last fall Canada sent Canadian soldiers to Iraq to train local Kurdish fighters and CF-18s fighters to bomb Islamic State positions. We felt we had no choice. We were witnessing mass slaughter at an alarming, lightning pace that was sweeping across the region,”.

He also added” the Conservative government would accept an additional 10,000 refugees from Iraq and Syria over the next four years who have the target of Islamic State extremists”.

Harper  pledged 9 million Dollar over three years to support persecuted religious minorities in the Middle East with the funding earmarked to protect places of worship and religious artifacts threatened by the Islamic State.

The Conservative government has faced criticism for not moving faster on earlier pledges to welcome refugees from the region. Harper said Canada has accepted 20,000 refugees so far from Iraq and another 2,500 from Syria.