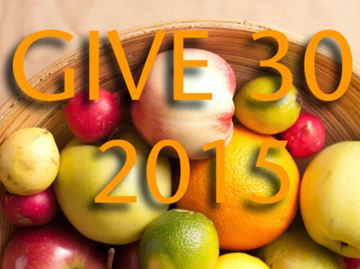 This year, Muslims in Canada launched a campaign to feed the hungry during “Ramadan” the holy fasting month. The campaign will begin in the first day of Ramadan 18 June across North America and will runs until September 11.

The campaign started in 2012, and it becomes a national campaign with eleven partner food banks in six provinces.  It runs in Toronto, Vancouver, Ottawa, Calgary, Winnipeg, Quebec, Edmonton, Mississauga, Kingston and Regina. It has raised about 250000$ to fight hunger during the past three years.

The idea of the campaign is taken from Ramadan the month when Muslims engage in a physical fast and spiritual contemplation.  They don’t eat or drink anything between dawn and sunset for a month. So for Muslims Ramadan is about food, hunger, empathy, social solidarity and giving. That is why It is the perfect time for them to fight hunger in community by supporting the Give 30 Campaign Food Banks

People who aren’t fasting or not Muslim can also take part in the campaign , as donations can be accepted from people  with different  faiths and backgrounds as This initiative is about everyone coming together to address a community challenge.

Give 30 founder Ziyaad Mia says “Brown bag your lunch for the month or tally up 30 days of coffee money…Whatever it is, it can make a difference in the lives of those who don’t have enough to eat”. He added, “Everyone can participate in the spirit of Ramadan Hunger knows no race, religion, ethnicity or creed and that’s why it’s important for everyone to join Give 30”.

Mia said “The celebration of Ramadan is a month to build the spiritual connection with the creator but also it’s a time to appreciate the importance of food, to give thanks for it, and to not be wasteful”. “The success of the campaign to the simplicity of the idea and the power of social media”.

According to Statistics Canada, Muslims are the fastest growing religious community in Canada. it increased by 82%  over the past 10 years from about 579000 in 2001 to more than a million in 2011. Muslims also represent 3.2 % of Canada’s total population.