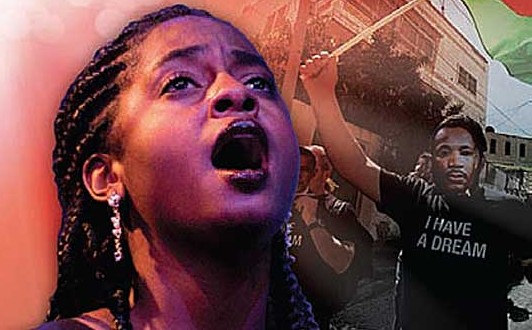 There’s something quite remarkable about a play. A great actor can magically connect with a person sitting in the last row of a theater. Intense emotions can engulf the audience, one heart at a time. The story unfolding on a stage captures you and makes you part of the play. No matter how many millions are spent on A-list stars and special effects, a sleek Hollywood movie just doesn’t have this power.

The world premiere of “Camp David,” a riveting new play about the 13 days of negotiations in September 1978 that led to the Israeli-Egyptian peace accords, grabbed the audience’s full attention and never let go. The crowds who filled the Arena Stage’s Kreeger Theater in Washington, DC from March 21 to May 4 sat on the edge of their seats for 90 minutes—even though most of us knew how this drama ends….President Jimmy Carter and Egypt’s President Anwar Sadat may have fought valiantly for peace between Israel and all Arabs, but in the end Palestinians were left high and dry.

“Camp David” was produced by Gerald Rafshoon, White House communications director under Carter, and written and thoroughly researched by Pulitzer Prize winner Lawrence Wright, who studied and taught at the American University in Cairo from 1969 to 1971 and is a staff writer for The New Yorker magazine. Artistic director Molly Smith directed the play, which made its timely debut just as more recent peace talks, led by Secretary of State John Kerry, were falling apart.

Emmy Award winner Richard Thomas (“The Waltons”) plays a congenial but determined Carter who disregards warnings from his entire staff, not to mention his wife, Rosalynn (played by Tony Award nominee Hallie Foote), not to take the two bitter enemies to Camp David.

“I’m staking my political career on this summit,” Carter says to Israeli Prime Minister Menachem Begin, played by Tony Award winner Ron Rifkin (“Alias” and Broadway’s “Cabaret”). In truth, all three negotiators risked everything to take this political gamble for peace. Anwar Sadat, played by Khaled Nabawy, was assassinated three years after the Camp David meeting. Nabawy, “Egypt’s Brad Pitt” and  a superstar in both Arab and American cinema (“Kingdom of Heaven,” “Fair Game” and “The Citizen”), spent two hours before each performance putting on the makeup and wardrobe that helped transform him into Sadat. “I wanted to bring his soul, his spirit, his dignity,” Nabawy told NPR’s Scott Simon, and he succeeded. Nabawy’s superb acting brought the audience to tears as Sadat implored Carter and Begin to discuss settlements, borders, Jerusalem, an independent Palestinian state, and the return of Palestinian refugees in order to forge a just peace in the Middle East. Carter promised to deal with these issues in his second term, and Begin agreed to stop building settlements in the West Bank and Gaza. (Sadly, we know how those promises went unfulfilled.)

At the Secretary’s Open Forum at the U.S. Department of State in Washington, DC on April 29, Kerry praised the “Camp David” production as he introduced the cast, adding he hoped to actually see the play if it goes on to Broadway. (He’d been on the road so much dealing with Crimea and Israel/Palestine he’d missed seeing the DC production.) So he wasn’t able to tell diplomats what he thinks about the 1975 letter Begin waves in the play, a then-secret letter written by President Gerald Ford to Prime Minister Yitzhak Rabin that committed the U.S. to coordinate with Israel before putting forth any proposals on the Palestine issue. Will we ever know if Netanyahu regularly flourishes that letter? Kerry did profess his determination to continue negotiations that have not budged in decades on any one of the substantive issues Sadat mentions.

At the Forum, Rifkin, who said he grew up in an Hasidic family in Brooklyn, NY hearing strident, unyielding voices like Begin’s in his own neighborhood, told State Department listeners that he was tormented by his role as the Israeli leader, stonewalling Carter and Sadat at every turn. That’s not me, he said. I love Carter and Sadat, and it tears me up to play this role every night.

Wright and Rafshoon pointed out at the Forum that the actors who played the Carters, Begin and Sadat had taken their own big risks to perform in “Camp David,” sacrificing big salaries and valuable time in hopes of promoting dialogue and peace.

Another play, one most Americans have never heard of, was transformed into a gripping documentary. “Al Helm: Martin Luther King in Palestine” debuted at Washington’s international film festival, Filmfest DC, on April 22 and 23. (Al Helm is Arabic for The Dream.) Connie Field directed and produced this film, which chronicals an African-American gospel choir’s 2011 tour of the West Bank, where they perform in a Palestinian play about Dr. Martin Luther King, Jr. The filmmaker follows the apolitical American performers who discover a modern-day people using nonviolent resistance to combat racism and oppression in their daily lives.

The film becomes a play within a play as the audience watches, aghast, on opening night as, without the knowledge of the playwright, Stanford historian Dr. Clayborne Carson, Palestinian director Kamel El Basha moves the final lines of his play to the beginning. The tense negotiations and painful resolution are as difficult to watch as the talks at “Camp David.”

The film takes another shocking turn on the 43rd anniversary of King’s assassination, a week after “Al Helm” plays at Freedom Theater in the West Bank’s Jenin refugee camp. Just before the play’s closing night in Ramallah, Palestinian and American performers learn that Juliano Mer-Khamis, the son of a Palestinian intellectual Saliba Khamis from Nazareth and a Jewish mother, Arna—the inspiring Freedom Theater founder they had just worked with—has been murdered. Mer-Khamis, the symbol of a binational dream, is dead from an assassin’s bullet. The parallels between the play’s script and the real life tragedy are heartrending.

But the most powerful part of the film is the gradual awakening of the seven American gospel singers who arrive in the Holy Land so eager to see biblical sites and ride camels. They are shocked to observe segregation in Hebron and the separation wall that divides a Palestinian man’s backyard in two. The scene in which Ramzi Maqdisi, who plays King in their play, destroys his family’s home with a sledgehammer after receiving an Israeli demolition order is unforgettable. According to Maqdisi, if he doesn’t demolish their home himself, Israel will bulldoze it, then send his family a bill for $30,000.

The Holy Land visit transforms the choir members, who have been brought up to devoutly support “God’s people” and the Israeli government. African Americans and other churchgoers and activists who see this inspiring film (available from <www.clarityfilms.org> and the AET Bookstore) can help initiate badly needed discussions about U.S. foreign policy in their congregations and communities.

The English-language premiere of “The Admission,” a controversial Israeli play, was marred by conflict before it even opened at Theater J in Washington, DC. Motti Lerner’s play is about Giora, a wounded young Israeli soldier, passionately played by Danny Gavigan,  who presses Avigdor, his complicated father, played by Michael Tolaydo, for the truth about his involvement in the 1948 massacre of Palestinians in a village called Tantura. A local ad-hoc group, calling itself “Citizens Opposed to Propaganda Masquerading as Art,” tried to cancel the play and threatened to withhold $250,000 in donations to the DC Jewish Community Center, which houses the theater company. As a result of the dispute, “The Admission” was presented in a shortened, scaled-down (but sold-out!) run at Theater J. The play moved to Studio Theatre for another three-week engagement from April 30 to May 18, 2014, thanks to Iraqi-American restaurateur Andy Shallal, founder of the popular Busboys and Poets.

“For us living in America today, Arabs and Jews and others interested in a just peace in the Middle East, the Israel/Palestine issue is a subject that is rarely discussed in mixed company,” Shallal said at the Studio Theatre opening night.“Yet, it is a fundamental topic full of preconceived notions and overstuffed baggage. Lots of unpacking needs to be done before we can move forward. It is through art that such a process can take shape.”

It’s essential to support theatrical productions like “Camp David,” and “The Admission,” as well as films like “Al Helm:  Martin Luther King in Palestine.” Playwrights, filmmakers and actors are staking their careers and fortunes by bringing political plays and films to life. If they succeed, they can open Americans’ minds and hearts, and start meaningful conversations about Middle East peace. But to do so they need support from every one of us. ❑