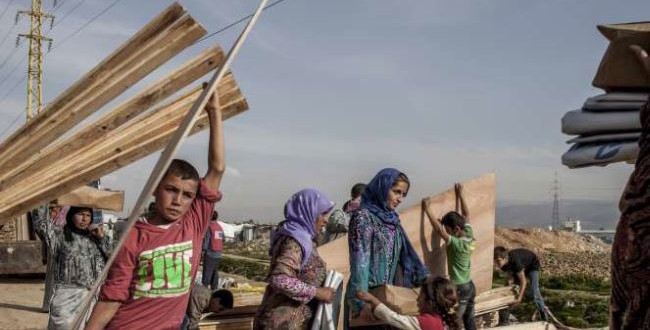 The UN on Thursday requested for $8.4 billion so that it can provide emergency aid and more permanent help to almost 18 million people in Syria and its neighbors affected by the Syrian civil war. The appeal includes funding for shelter, food, humanitarian aid and developmental support.
UN agencies had initially asked for$2.9 billion to help 12.2 million people in Syria by 2015. An additional $5.5 billion has been sought to for people living as refugees in neighboring countries and for over a million people in the host countries. The appeal made in Berlin is slightly more than the indicative amount announced earlier this month in Geneva, which didn’t take into account funding for host countries.
“For those that think that this is a lot of money, I don’t remember any bailout of any medium-sized bank that has cost less than this”, UN High Commissioner for Refugees Antonio Guterres said.
He also warned that refugees and displaced Syrians within Syria had exhausted their saving, and that the host nations are at their “breaking point”.
According to UN humanitarian chief Valerie Amos, Syria has slumped from being a middle income nation to struggling with widespread poverty.
“People affected by conflict need food, shelter, water, medicine and protection. But they also need support in rebuilding their livelihoods, maintaining education and health services and rebuilding fragmented communities. The conflict in Syria is not only destroying people’s lives today but will continue to erode their capacity to cope far into the future if we don’t take a more holistic approach now”, she said.
“The humanitarian crisis in Syria and the neighboring countries poses a threat to the stability of the whole region. This is a call to the solidarity of all nations, and my country is willing to do its part”, German Foreign Minister Frank-Walter Steinmeier said.