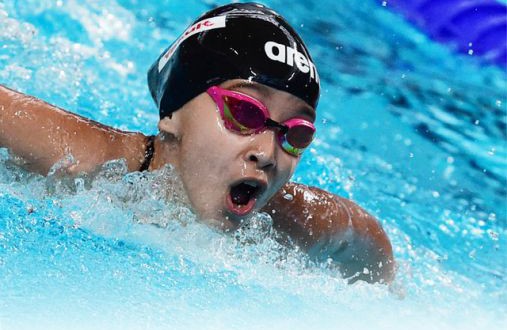 Alzain Tareq, the 10-year-old swimmer was the world championships’ youngest competitor in Kazan swam her personal best to finish third in her 50m freestyle heat.

The Bahraini girl had caused a splash at the Kazan pool on Friday morning when she raced in the women’s 50m butterfly heats and finished last of the event’s 64 competitors.

She is believed to be the youngest swimmer to have ever swum at a world championships.

on Saturday , she finished third in her 50 freestyle heat and was 105th overall of the event’s 113 racers with a new PB of 35.78 seconds ,nearly three seconds faster than her qualifying time.

She was more than 11 seconds slower than Cate Campbell of Australia’s fastest qualifying time.

It is unlikely Tareq will fulfill her wish to swim at next year’s Olympic Games in Rio de Janeiro, even though there are no age restrictions to competing at either a world championships or an Olympics.

She qualified for Kazan as the Bahrain’s fastest female swimmer. But to swim in Rio she will need to lower her 50m freestyle personal best of 35.78 to meet the Olympic’s minimum qualifying time of 26.17secs to race in her strongest event.