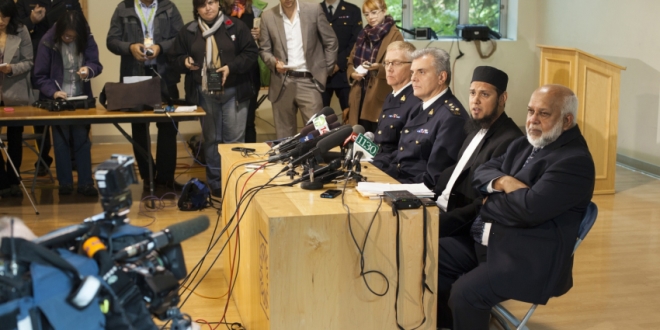 Attention on Burnaby mosque due to Ottawa gunman

The Masjid al-Salaam mosque in the town of Burnaby has recently come under the spotlight after it was discovered that Michael Zehaf-Bibeau, the man behind the Ottawa shooting, had attended the mosque. However, on Friday, the mosques fielded questions from international press members to dispel all notions that the Mosque has not condoned his actions.

B.C. Muslim Association’s spokesman for religious affairs Aasim Rashid said that Zehaf-Bibeau had objected to the mosque accepting all faiths.

“He had some objections to the frequent visits by non-Muslims. The mosque administration sat him down and said that this is how we will run the mosque, they will keep their doors open for all Muslims and non-Muslims to visit”, Zehaf-Bibeau.

He also said that Zehaf-Bibeau had broken into to the mosque on several occasions to sleep.

“The caretakers of the mosque identified him and they warned him not to sleep here. This happened two or three times and on one occasion they actually caught him sleeping. At that time, he was told to leave the premises and not to sleep here again and not to come back again”, Rashid said.

RCMP Assistant Commissioner Wayne Rideout said that the BC Muslim community has been working with the police since 2005 through an outreach program. He also emphasized that people have the right to hold certain ideologies, and that the police should step in only when thoughts may potentially become criminal actions.

“What we need to look for are changes in behavior that are sudden and out of the norm, in that they begin to act in a way that is different. (People of concern) tend to espouse the use of violence, or extreme activity in support of their beliefs. Perhaps they talk about specific individuals in a negative way, or they seem to have a fixation on particular agencies, institutions, or individuals or they’ve acquired skills or weapons”, he said.