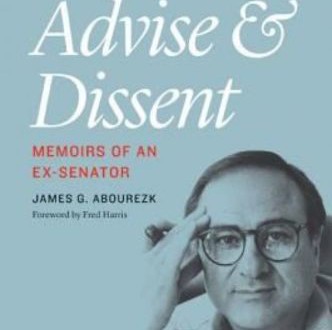 Reviewed by Andrew I. Killgore- WRMEA 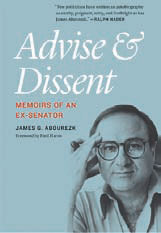 Former Congressman and U.S. Senator from Rapid City, South Dakota James (Jim) Abourezk mulls over his life and career with special praise for some and harsh words for others. The balance comes out about even, but Jim’s summing up of people and events leaves a tart taste in the mouth.

Jim’s Advise is the autobiography of a brilliant man born 82 years ago into an immigrant family of Lebanese/Syrian descent in Wood, South Dakota. Conditions there at the time were hardscrabble, with American Indians being at the bottom of the barrel. In his early days Jim, like the others, looked down on them, but a social consciousness erupted one day. A bunch of boys were bullying another boy from an unusually poor family, the Zinemas, whose mother was overweight and eccentric.

Suddenly Jim shouted out that they should pick on him instead. The bigger boy beat Jim up, but Jim inflicted some damage himself. That early fight says something true about Jim Abourezk. He simply cannot abide or tolerate injustice.

Jim spent a hitch in the U.S. Navy and went to Japan, where Japanese girls taught him a semi-fluent version of Japanese. When he got out he met the erudite Dr. Joseph Studenberg, who introduced him to great writers and liberal journals such as The Nation and The New Republic. When all the doctors in Wood decided to charge $5 for an immunization, Studenberg said he would charge only $1. The $1 charge stuck.

With a burst of energy Jim earned a degree in engineering but found it hard going, with not much money coming in. He then earned a law degree from the University of South Dakota. If one has a vision of a slick lawyer making lots of money, Jim had done everything before he became a lawyer: a bouncer, bartender and traveling salesman trying to make a living.

But he met and became friends with fellow South Dakota Congressman and Senator George McGovern, who inspired him with his sky-high principles and personal grace. McGovern’s battles with conservative Sen. Karl Mundt were gripping.

Then Jim ran for Congress and won. Serving only one term, he then ran for the Senate and won. But he became disillusioned with the culture of the Senate and decided well before his term expired that he would not seek re-election.

A compelling reason for reading Advise is that it contains the South Dakota tales of Jim Abourezk, a master storyteller. It’s simply full of the most delightful recollections.

Jim took up the cause of the mistreated Indians both in Congress and afterward. At Wounded Knee he dealt with Indian leaders Russell Means and Dennis Banks. The 70-day drama of Wounded Knee was a mixture of tragedy with an overlay of humor.

As Jim looks back on his career he does not claim to have climbed the mountain. But he is in fact a lion of Arab America—I would say The Lion. He is by all odds a great American. He successfully created the important American-Arab Anti-Discrimination Committee (ADC) to fight off Arab and Muslim denigration by Zionists and by the media.

He lists the 15th century’s Sir Thomas More, St. Joan of Arc, Mohandas Gandhi, Martin Luther King and the boxer Muhammad Ali as people who valued their souls and their principles over their own lives. Then he lists George McGovern and Mahmoud Ali Dieb (the father of his present and third wife) in the same category. The two men had something in common.

Jim describes a driving tour of South Dakota with McGovern, who tells him of the Food for Peace program which McGovern had headed. As McGovern describes it, the program enabled poor African girls of ages 11 or 12 to avoid marriage simply to provide support of their families.

Jim’s father-in-law, Mahmoud Dieb, had been left on his own at age 6. But he was a hustler and slowly became well off. When he married in Syria he insisted on educating his daughters, including Jim’s wife.

Jim concludes his epilogue with these words: “The conservative majority on the U.S. Supreme Court unleashed the moneyed class with their Citizens United, which allowed unlimited amounts of money, most of it untraceable, to be dumped on federal candidates for office.” He says democracy will not be advanced.

The now not-so-young lion is despondent at the end of his epilogue. “There will be fewer and fewer George McGoverns—and others like him—who will be willing to challenge the moneyed class. There will be less and less democracy, until finally we will be confronted with another Great Barbecue [the titanic corruption at the end of the Civil War]. Money will be the only thing that counts, and men and women with principles and morals will only be available to read about in the history books.”

Jim Abourezk is a great man admired by many thousands, and many of these, including this writer, feel a real affection for him.

Andrew I. Killgore is publisher of the Washington Report on Middle East Affairs.