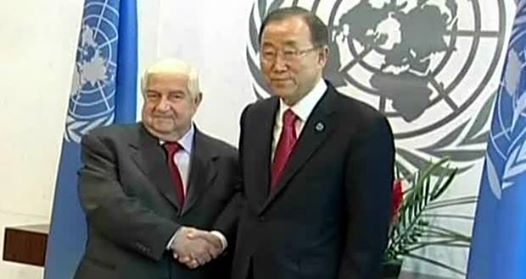 The Syrian regime will not begin talks on ending the Syrian civil war as long as extremists are tearing through the country, Syrian Foreign Minister Walid Muallem to the United Nations General Assembly on Monday.

“We cannot start any political solution while terrorism is still rampant in Syria”, he said.

His statement has seemingly ended the prospects for resuming peace talks in the immediate future despite the efforts of UN peace envoy for the Syrian crisis Staffan de Mistura, who was appointed back in July to restart dialogue.

Mualem also dismissed the Syrian opposition recognized by Western powers, and said that it could not attend any peace talks since it lacked credibility and followed “the orders of its Western masters”.

“We are open to a political solution in Syria, with a real opposition … that does not depend on the outside”, Mualem said.

The West has stepped up its aid to moderate Syrian rebels, including providing training by US experts for rebel fighters to face Islamic State (IS) extremists.

Mualem also slammed countries supporting extremist groups, subtly attacking Gulf countries from where the al-Nusra Front and the IS have military and financial backing. He said that combating the threat “is certainly possible through military strikes”.

“But most importantly, to do so through stopping states that arm, support, train, fund and smuggle those terrorist groups”, he added.

The UN Security Council recently adopted a resolution asking countries to take action and cripple financial aid to extremist groups and stop the flow of foreign nationals fighting in the Middle East. Mualem said that the resolution was “unimplemented” and warned that without action being taken to cut off extremists from the financial backers, a military campaign “will create a whirlpool of which the international community will not exit in decades